The ritual was always the same.  He would kick me out of bed at 4am. Mom would have poached eggs over toast for us ready on the table. We would discuss where we were going and any things of interest in the area.  We would examine our rods and reels for wear.  The first spinner of the day was tied on at the table to assure the knot was true in the light. Tying on a lure in the dark on stream many times was a recipe for disaster. The last thing he did before leaving the house was put on his hip boots. I always eyed up those hip boots.  I wanted a pair just like them but they didn’t come in boy sizes.

We got in the van in the darkness and headed to our stream. Dad timed our arrival on stream to be as dawn broke. The trout seemed to be less weary in low light conditions. Many times the fog was still hugging the streams on our arrival. 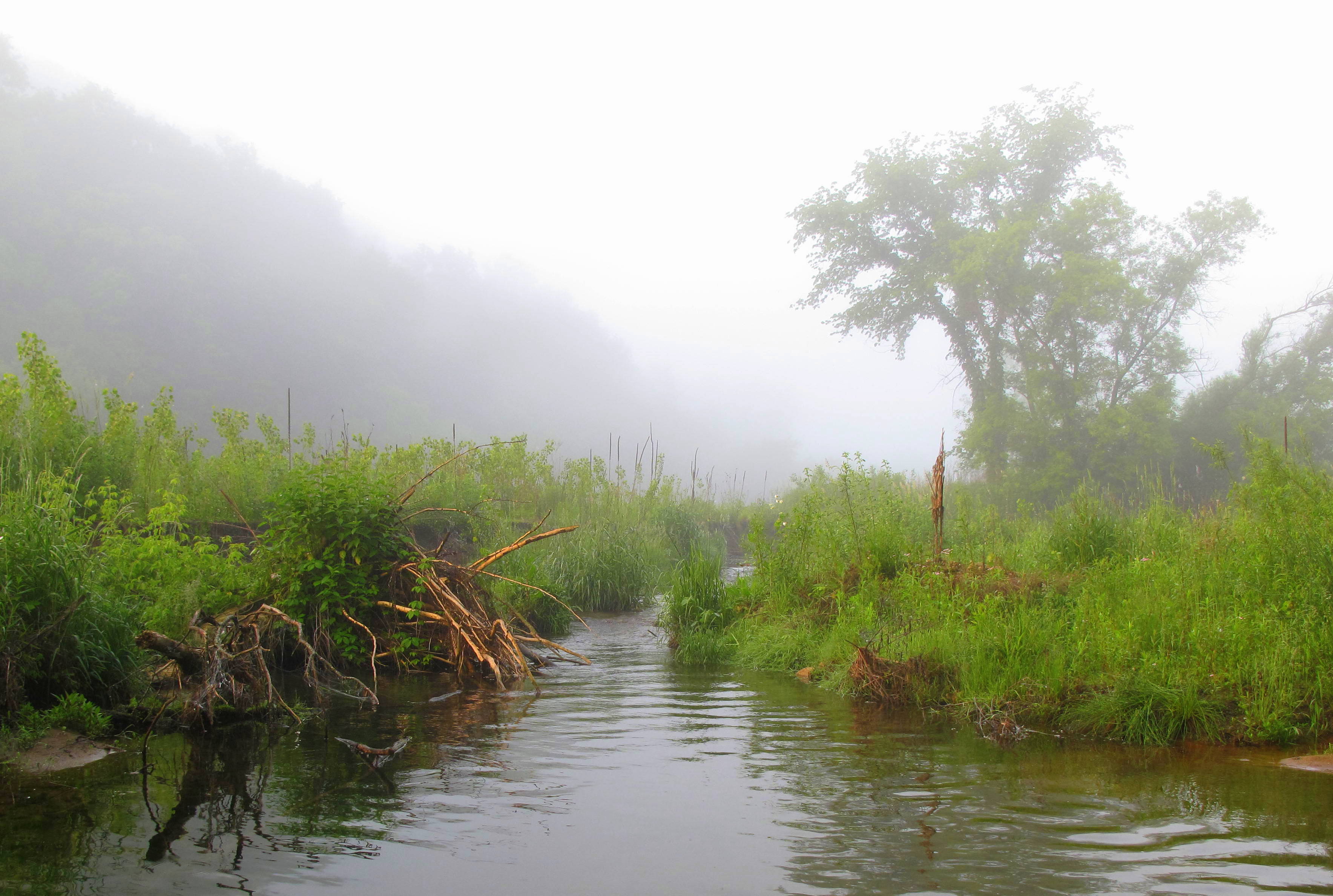 For some mysterious reason the trout seemed to love the foggy mornings.  Dad and I would have almost magical luck fishing in the fog.  The fish were more plentiful and bigger when it was foggy. We even sat down a couple times on stream and talked about the fog and its magical properties.

The fog lifted and the trout shut down almost instantly.  We usually had our limit by then anyway and were heading back to the van. Dad peeled off his hip boots and put on slip-on shoes at the vehicle.  I was kind of a whiner and talked about my feet being cold and wet. Even if I stayed out of the water my feet always got wet from the dew in the grass. I wanted to grow up quickly so my feet would grow and I could get waders just like Dad’s. We had tried bread bags inside my shoes but my feet always ended up wet and cold.

We got home before the girls were awake.  We cleaned our trout right on the kitchen counter and washed them in the sink.  My mom would always complain about our messes and she would make sure we cleaned up after ourselves in the kitchen.

The next stop was the gas station downtown to tell our tales to the other locals there. The guy that owned the gas station was always there bright and early to open it.  He got to see if there was fog in the bottoms.  He would greet us as we enter with: ” I see it was foggy this morning, I bet you really slayed the trout because of it.”  It was a running joke at the gas station with the locals about the fog and its magical qualities.

My memorable outings with my dad ended in November of 1967.  He died of a heart attack at age 40.  The locals descended upon our house to see if there was anything they could do for my mom.  Each time one would leave they would purchase some of my dad’s outdoor gear.  They knew my mother was broke and would usually not take advantage of her and pay more than the fishing poles or hip boots were worth.

My trips to the gas station ended for a couple years.  I began going again after I got my first bicycle and pedaled to the stream and caught trout.  I went there to tell stories like Dad and I did.  It wasn’t the same without Dad.

I still went fishing and targeted foggy mornings.  The fish didn’t seem to know Dad was gone and still bit like crazy.  The magic was still there.  Many mornings I would swear I saw Dad just a little ahead of me wading in the stream as the fog broke.

Adulthood took me away from my streams for a while.  I wandered around the world in the Army.  I ended up right back in my hometown after the Army.  The streams beckoned and the magical foggy mornings awaited me.

I submitted a couple stories to my local newspaper about my fishing adventures and they liked them and ran them in the paper.  I took up writing as a hobby. Many of my stories were about me and my dad.  I embellished a little and portrayed him as almost a “Super Dad.”  I made him into what I wished he had really been.  He had no negative qualities and always caught huge fish.  He could do no wrong.

As a kid I didn’t have a male role model.  My mother took on being Mom and Dad to me.  My exposure to other males was minimal because of my dad being gone and me having five sisters.  I remember seeing a neighbor interact with his teenage son in the yard.  They were arguing loudly about something and the next thing you know the son was throwing green apples at his dad.  Some of those had to hurt.  One bounced off his forehead a good ten feet.

This exchange made me think about what if my dad had lived, would we have gotten along?  I liked to think my Super Dad image I painted him in my stories was the way he would have turned out.

I am retired now.  I write for many publications now regularly. My love for the outdoors has not waned.  My body has not aged well and I am a little limited in my number of outings these days.  But the fire still burns inside me for the outdoors.

Recently I went out on the last day of season.  It was a tradition my dad and I made back when I had wet feet and endless energy. I put my chest waders on before I left the house.  I made my poached eggs and toast before going out.  It was really foggy as I drove to the stream.  I headed to the same stream that I had caught my very first trout in many years before. I arrived in the dark and parked on the road.  I pulled my vehicle way off the road because of the dense fog.  I didn’t want anyone to run into it.

The dead end driveway was long and a little spooky in the dark.  I loved this stretch because it was a favorite of my dad and I. I had never seen another angler fishing it in over fifty years.

I waited to start fishing because it was still a little too dark.  I heard something upstream.  It sounded like another angler.  I was really disappointed that I was beaten there.  The sun started to come up and the fog was there in all its glory.  I saw the other angler there in the distance.  His image faded in and out of the mist.  I could see he was an older gentleman. He was thin on hair and wore a pair of hip boots just like my dad’s. 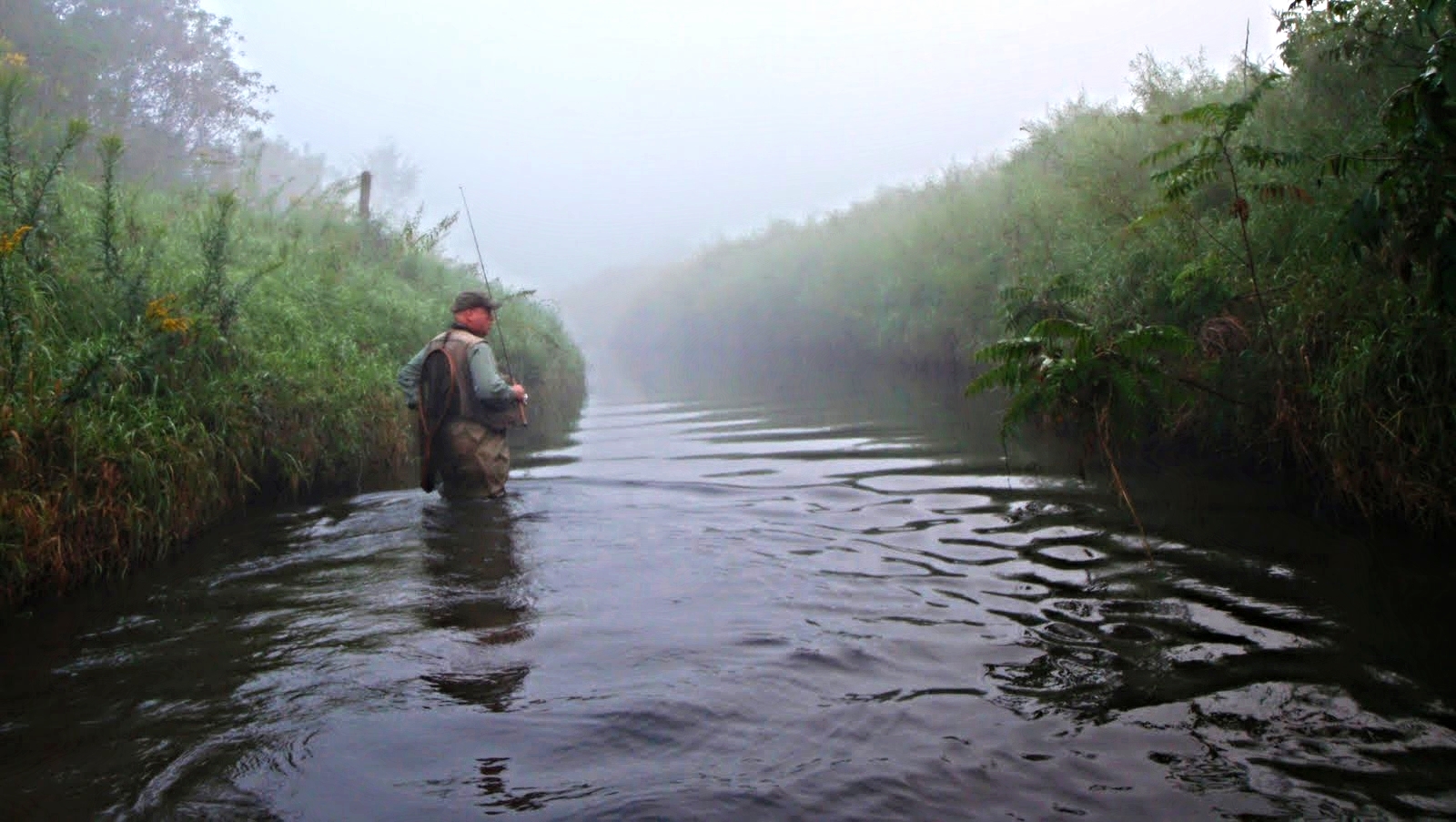 My curiosity got the best of me and I walked up to him and asked him how the fish were biting. He opened his creel and showed me his trout.  He needed one more to have his limit. I admired his fish and he complimented me on my waders.  He told me he bet those kept me dry and warm.

I told him about my stream and how I had never seen another soul on it.  He didn’t respond.  He went back to fishing.  He hooked up on a nice trout and landed it and put it in the creel.  He told me the stream was all mine and to get fishing before the fog lifted. As he walked away the mist blurred his figure and he seemed to disappear before my eyes. On the way home I questioned if I had really seen him or if it was the magical fog bringing back memories of yesterday. 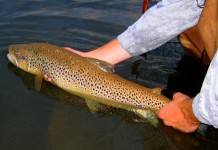