Two years ago Scott LaRochelle and I were fishing an upper stretch of one of my favorite streams. We had fished a long ways and I was sucking wind and dragging my left knee.  My vehicle was 40 yards ahead so I kept going.  Scott was ahead of me and he stopped in his tracks 10 yards ahead of me and yelled at me to hold still.  Scott dropped to the prone position and started casting. He was using a fly rod and changed the fly numerous times.  I noticed he threw mostly big stuff so the target had to be large. 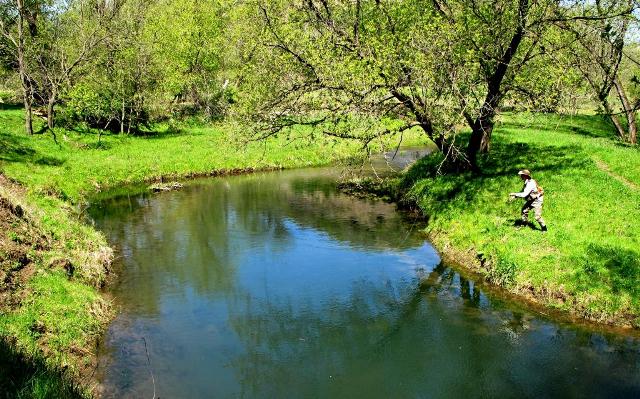 He did this for a long time before he stopped and spoke to me. He was really nervous and I had a hard time understanding him at first.  I translated this from what he was saying.  He said: “There is a monster brown 15 yards ahead of me in that shallow pool in the middle. Why don’t you throw your spinner in there and try to get it.”

My first cast spooked the trout and it ran around in the hole for a while and went tight to the bank.  Scott told me it had to be 25 inches and it was a male.

I smiled when he told me about it being so big.  This was head water and a large brown would be out of place this far up.  I went to the bank where it disappeared and stuck the end of my pole under the back and out it shot.  It was at least 25 inches.  I was flabbergasted.

The pit-bull that I am, I fished that area 30 more times by the end of the year.  No big boy home.  I fished it 5 times the next spring with no results.

I told a couple of my friends about the monster. Most rolled their eyes, but one in particular old timer listened to every word I said.  He asked if it was ok if he went after it.  I thought the fish had left the building so I said go for it and I told Abe who to ask for permission.

Abe went after the trout last year in September.  I never heard back from him until yesterday. I assumed he had not found the monster.

The phone rang last night and it was Abe. Abe told me he went to the stretch I told him about and no one was home there, but the next hole upstream was a different story. 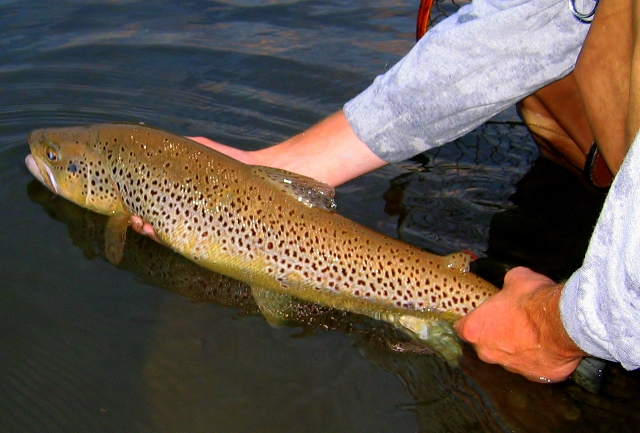 He thanked me profusely for turning him on to the biggest trout he had ever seen in his life.  He tossed a size 5 countdown in the next hole up and the monster bum rushed his Rapala and rolled at it and never appeared again.

He estimated the trout at 27 inches and 6 pounds minimum and it was a male with butter coloring.  I wish this dang knee and back would heal faster so I could chase it.