The Fishidy Blog
Home General Fishing Click During the Off Season, Walk In During the Season.

What your local tackle shop can do for your fishing.

I’m over cursing the internet because of too much information and spot burning.  There are still many that hold a grudge.  Deal with it, Y2K didn’t happen and the internet isn’t going anywhere but bigger.  That said, you’d be a fool to not jump at some of the deals online when you find a gem.  Free shipping included is a great bonus, but so is the insight, quality, trust, and friendship in being a regular at your local tackle shop.

I split fishing time between the east end of Long Island and around Manhattan and its surrounding waters.  Out east there are some great shops, and I call Haskell’s in East Quogue home.  In the city, I got a guy over on 36th street, Capitol Fishing.  The two shops couldn’t be as different and the same.

Situated in the garment district, Capitol takes care of everyone from first timers to serious offshore anglers and everyone in between.  The brilliance of being in the city isn’t just having reports from the NY Bight, western sound and the western south shore. With such a cross section of patrons that fish every weekend, reports trickle in from Cape May to Cape Cod, The Race off Orient, as well as the south and north sides of Montauk.  I’ve become friends with Eric at Capitol over the years. He’s saved me time and money, and helped me catch a mess of fish.  Plus what’s cooler than crossing Fifth Avenue at rush hour with an 8 foot Lami on your shoulder for the walk home? 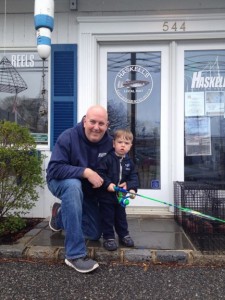 My first trip to Haskell’s I’m sure I came across as Al Czervik in Caddyshack, getting one of these and two of those, neither that I really needed.  Less is more.  It’s one of the best things I learned as I fished more and more.  Lighter test line, leader, swivels, and lures suggested by Tom and Pete enlightened me to the feel of the subtle bites and overwhelmed me when the big ones bit.  Understanding the trickery of pulling a fish from the ocean was more fascinating than dumb luck of the right place at the right time fishing I had known.  Lifelong anglers themselves, the staff of Haskell’s is always in the know for the waters of the east end.  Their willingness to point customers in the right direction keeps all of us coming back.

It’s been a slow start to the season for stripers and fluke.  Fish are getting taken in more abundance off northern jersey and western long island.  Sporadic fish in a barrel sessions have been going on in the NY Bight. Look for things to bust wide open in the next 5-10 degrees of rising water temps.  All the bluefish you can handle if you want them both by boat and surf, mostly on chunks along the south shore as far east as Moriches. 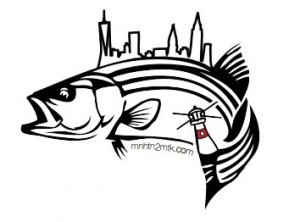