I lived in Germany from 1978 to 1984. The trout fishing there is legendary. The glacier fed streams were cold to say the least. While in the Army there I decided it was much too rich for my blood. I was an Army Sergeant there.

Fishing in Germany was quite an undertaking. There were classes to get a license that cost nearly a thousand dollars and after you took your “hard” test you had to rent the waterway you planned to fish. When you fished the waterway… you had to rent it from the  individual or club that owns the rights for the waterway. Also you had  to present the trout to the land owner and if he wanted it you must give  it up. No matter if it was a trophy or a dink. My limited army income made it nearly impossible. 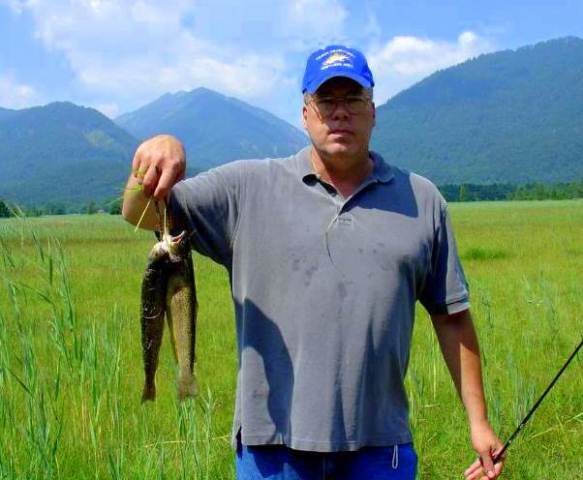 While in the service I made numerous friends withe locals. My best friend in Germany is named Jan Tomasak.

I met him the first day I arrived in the country. I flagged him down. He was a taxi driver. He was a college student working his way through Architecture School. I asked  him to show me around the city. Jan turned off his taxi meter and went  off duty. Jan showed me through every nook and cranny of Augsburg. This boy knew Augsburg. We became best friends. The years passed and the women passed but one thing stayed the same. Jan was my best friend and would be for life.

Jan had dreams of big things. He talked about retiring at age 40. He had the drive and I thought it could be possible. I departed Augsburg, Germany in 1984. Jan had his first architecture business already started.

Five years after I returned to the USA I invited Jan to Wisconsin to be my photographer for my wedding. He jumped at the opportunity.

It was  my wedding day and Jan was down in the basement of the church with me. We were standing at the back door of the church in the basement. He opened the door and told me: “This is your last chance to escape.” I just smiled and and told him: “No way.” His response was: “Good, I would have tripped you and carried you inside if you did something so foolish. This one is a keeper.”

Jan flew back to Germany that next day. We went to visit him a couple times in the ’90s. He was becoming quite the business man. His  business was flourishing.

He even talked about expanding to the East when it opened. The East opened. Jan was the man. He went in to the old country and made some good business investments. He sold all his holdings and bought 12 apartment buildings in Augsburg. That same year he invited my family to the Millennium Ball he was throwing in the Czech Republic . It was a black tie affair with all guests being transported to the Castle in the Alps by an eight white stallion carriage. Evening gowns were a requirement. It was too rich for my blood, but I was really impressed by Jan’s success.

Five years passed and I had to listen to Jan saying he was retiring that year at age 40 and we needed to come visit him.  He wanted me to go trout fishing with him. He was a member of the Munich Fishing Club. They owned all the rights to southern Germany for trout fishing. I was to be his guest with no fees or school required. The Guest Pass needed to be carried with us.

July 2005 Barb and I went to Germany. I was planning the trip for six months prior. One month before we went I sent a big package over with  backup fish clothing and all sorts of gear. I had it planned down to  the last detail. I was going to spank some German trout tail.

Barb and I arrived in Munich on a Thursday morning. The fight was non-stop and I tried to sleep on the plane. I was too excited. I could  not sleep. I drove from Munich to Oberau in a rental car. I was spent.  I needed to sleep. We checked in to the Edelweiss Hotel at 11am. Barb and I were fast asleep.

At 1pm there was a knock at the door.  We rolled over and ignored it. The knock was louder the next time and a lot longer. I answered the  door. It was Jan. He wanted to go fishing. I told him I was beat and  needed to sleep a while. He was insistent and said he wanted to just drive around and talk about fishing and do a little scouting. 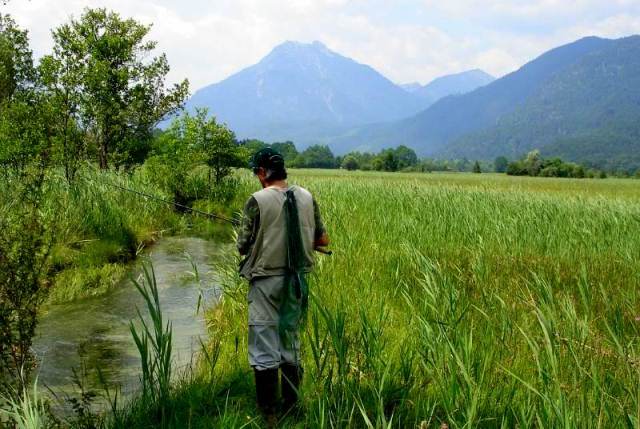 Jan explained to me that we were going to fish in the Leinbach River and  it was 10 minutes from my hotel. I thought what the heck. There was nothing wrong with scouting. As we drove he told me the German Fishing  Regulations. Between the 2 of us we had a one day pass and we could  catch one meter of trout and then we had to quit. The Munich club had a strict “NO CATCH AND RELEASE” policy. Anything we caught no matter the size had to be kept.

We got out of his van stream side and he started gearing up. I told him this was only a scouting mission. I needed to sleep. He told me: “You  can sleep when you are dead…. we are fishing.” I protested. I told  him I needed to get my gear out and waders and boxes. He handed me the  rod he had already strung up with a Mepps odd ball looking spinner I had  never seen before and said, “It is time to fish.”

He told me the trout were hard to catch and don’t feel bad if we didn’t catch anything. I took my wallet out of my blue jeans and took everything out of my pockets and off we went. The streams were tiny. The only place they widened was where the glaciers emptied in. I tried  casting from shore but I couldn’t reach where I wanted. My wife Barb got bored with watching us fishing and went wandering. I waded right in to the stream up to my waist. The streams were ultra cold. After the shock of the water and some serious shrinkage I placed myself in a good casting position.

Twenty minutes later I had THREE 15 inch trout and I was done fishing. All the months of preparation and shipping of gear was over in 20  minutes. Jan just smiled and said: “More time to go to local beer fests  and enjoy the sights.” We went to my friend’s home in Oberau and cleaned the three browns and cooked them on the grill. 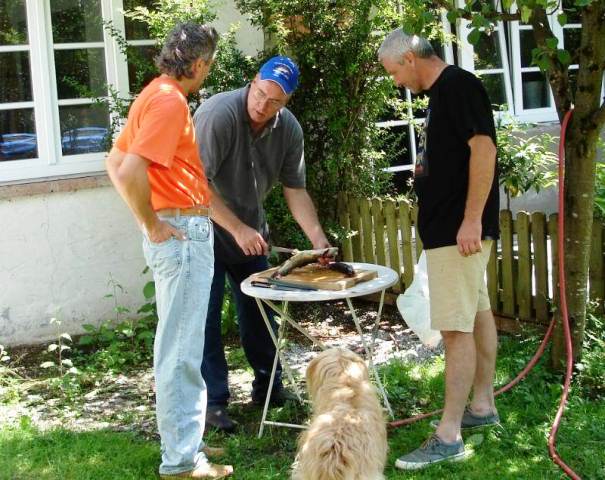 Two days later we were at Jan’s retirement party.