Chris Young is up from Chicago with the Lee Wullf Trout Unlimited Chapter for their Spring get together.  I had met Chris a couple years back and given him some tips on where to fish.  He much appreciated the tips.  I had never actually gone with him before because of my back and knee problems.  That changed yesterday.

We met at 9:00am on stream.  Chris is typically a fly angler but he does spin fish when his fishing partner is spin angling.  He was taught how to cast the spinning rod by Jay Thurston.  The underhand pendulum cast was unmistakable.  Thurston had taught him well.  His casts were right on target.

I was a little worried I would disappoint Chris because he had fished with Thurston.  Thurston is even more of a trout nut than I am.  The sun was bright in the sky without any clouds.  Trout typically shun bright sun light. We talked as we fished.  I watched 90 percent of the time.  This is the normal when I fish with someone else.  Chris did not come all the way up from Chicago to watch me fish.

I asked Chris about his typical day when he fished.  Most times he averaged around a dozen fish in a day and most were in the 9-10 inch range.  I smiled inside.  I thought this stretch had been good to me the last time I fished it.  Even with the bright sun light Chris should do better than a dozen tiny fish sticks.

About 40 yards in I saw a promising bend in the stream with a submerged stump.  I coached up Chris and had him cast exactly where I thought a decent trout would be laying and bang he was rewarded with a ferocious hit.  It went up on its side and we saw how big it was.  Chris got immediately nervous.  For an instant it was tangled in a submerged tree limb. I went down to the edge to net it.  The trout was having no part of it.  It finally tired and came to net.  I noticed the trout was barely hooked with the size 9 gold panther martin.  As I netted it the spinner came free.  Chris was giddy as a school girl.  He exclaimed this first trout was his “personal best” of his life.  He admired the wide bodied trout.  His typical tiny fish from Spring Coulee were much shorter and skinnier.  On stream I thought it was a male trout.  As I look at the short snout and see its girth in the photo at home I believe it is a female trout. 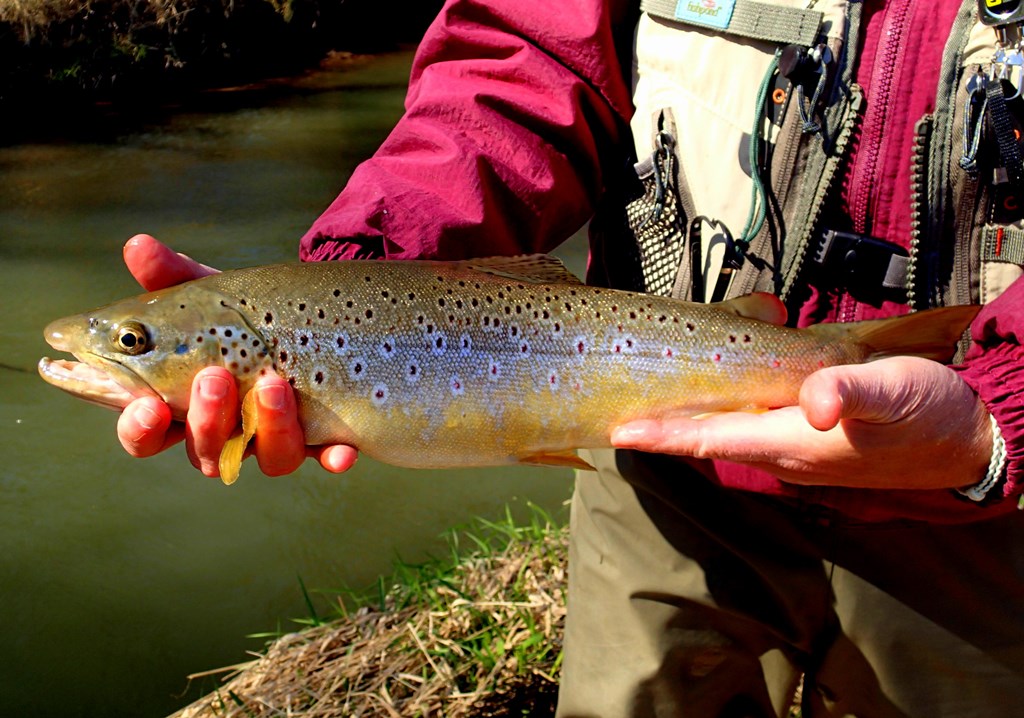 I decided because Chris used both a fly rod and spinning rod for trout and he would have a unique perspective on this Fly versus Spin debate that rages in the trout world. I have seen grown men red faced arguing about which is the better method of pursuing trout.

The debate typically centers around results versus enjoyment of nature and the art form that fly anglers claim that makes fly fishing superior.  Chris commented that there is something about catching a trout on a fly you have made.  He said it makes it very special.  I thought to myself that many guys make their own spinners and I enjoy nature just as much as another angler.  Chris left the debate open ended and didn’t pick a side.

I have trout fished for over 50 years and seen many excellent fly and spin anglers. I have not seen many that use both methods.  Spin angling is better for tight quarters and covering more water. The stretch we were fishing is almost unfishable in another month.  The weeds and bushes block the best lays and make the area almost impossible to fish.

We continued fishing the entire stretch.  At the end Chris’ tally was 35 browns and none were under 11 inches.  Chris had a dozen long line releases.  He also had a huge trout rock him to his toes.  “His words.” The trout did not stay on.  I explained to him that large trout get really tough mouths and it is common to bounce off the big hits.  Chris had a couple shake free at shore that were nearly as big as his new personal best.

We talked in the car as we left.  He thanked me for the best small stream outing of his life.  We promised each other to do it again soon.  Chris drove me to my vehicle and again thanked me profusely for the best day of his life trout fishing.  I drove home thinking about the spin versus fly thing.  Numbers and better sized trout versus art.  It was no contest in my book.