The Fishidy Blog
Home Fishing Stories A Moment In Time

My memory works too well some of the time.  I am the person in the photo.  I believe it was my wife taking the photo.  The photographer is the only thing I don’t remember.  My old catch phrase was not working this day.  Back when I did presentations at schools, I use to call the power point:  “Trout Don’t Live In Ugly Place.”  This day the opposite was the norm.   The banks were terribly eroded and cows had pulverized the banks.  My expectations were low this day.

It was early season in Crawford County.  I was crossing the stream because the hole in the distance was a 90 degree bend and I had caught a couple decent browns and brooks in the bend about 50 yards upstream.  When I got in the water, the loose sediment on the bottom there a huge cloud downstream and I frowned.  Typically when there is lots of loose sediment on the bottom there are not many invertebrates in the waterway.  For you non-trout savvy folks, the invertebrates’ word in layman terms is food or little bugs and water creatures for the trout to eat.

There were cows all over the place and I am allergic to bulls so I looking to see if any these bigger cows were sporting any hardware.  All of them looked like udders so I was about to cross the electric fence and the weirdest feeling come over me.  It was like a subliminal message.  I heard:  “Look to your left dummy.”

The water I was standing in was maybe 2 inches deep but there was a down tree laying on the electric fence on the left.  That down tree had roots that stuck up in the air a ways so I thought the ones under the water must at least be that long so there was a 18 -24 inch cut out under those roots.  I thought about the sediment flying up when I crossed and all that I have read in books by the master of trout fishing and decided I was going to cast above the roots anyway.

My first cast was an epic fail on a side arm cast under the electric fence.  It landed about 2 feet from the root wad.  Instead of reeling it in I just gave the rod a tug and reeled in my short not on target cast.  My tug caused quite a commotion near that root wad. There was a huge swirl there and I smiled and thought about all the know it alls in those fly fishing magazines and on the internet. Something was there and it wanted my panther martin.

I crouched down and did a better sidearm cast upstream of the roots.   I didn’t want my cast to scare my prey and I wanted the spinner to come down naturally like food.  I brought the size 9 panther martin brown trout pattern right next to the root wad.  There were no takers.  I continued to reel and then I saw it’s back come up out of the water and it followed my lure nearly to my feet and slammed the panther martin in 2 inches of water.  Three quarters of its body was out of the water when it hit.  The trout thrashing was quite a sight to the photographer.  He came screaming down the bank and netted the nice male brown for me.

Now that I think about it.  It was not my wife that took this photo it was Aaron Wachtendonk.  I snapped a couple of photos of the trout and let it go due to it be mandatory catch and release in early season in Wisconsin.  The big male brown had inhaled my barbless spinner and he was bleeding badly when I let him go.  He swam off really quickly but I am certain he died at a later time due to blood loss.  I truly hate mandatory catch and release season because of exactly what happened to me.  If trout are going to die they should not be released. It is wanton waste of our resources.  Catch and release season is a season forced upon us by the fly fishing world that thinks catch and release year round is the only way to go.  My wife Barb calls early season “Torture and Release” season.

Because I caught a trout, Aaron was up to bat.   He couldn’t get another one out of the electric fence hole so we moved upstream.  When I fish with someone there is an unwritten rule that says fish until you catch or lose one and then it is the next person’s turn to fish again.

The spring floods had carved quite a funnel on the left bank that wasn’t there the year before.  Deep funnels are typically fast water and on this downhill grade grade we were fishing the percentages of catching a nice fish were really low. Aaron struck out his first couple casts.  Fast water in early season typically doesn’t work well.   The water is too cold and the trout need to expend lots of energy to hold in place in frigid water and the reward versus effort wasn’t in the trout’s favor.

We only walked 10 yards upstream and there it was in the fast moving trench like area the spring floods had created!   There was a really nice boulder in the water.  This would be the perfect place for a trout to hide behind and be out of the fast cold water and still have a bird’s eye view of food going passed.  Aaron cast upstream about 5 yards above the boulder with his panther martin and ran the barbless spinner right by the slow side of the boulder and his effort was rewarded with the biggest brook trout he has ever caught in his lifetime.

The moral of the story is trout do live in ugly places some of the time.  Also don’t let the folks that write all the trout fishing books use their expertness to dissuade you from catching the biggest brook trout of your lifetime. 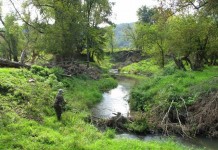 An End to a Season