A typical life expectancy of a small stream trout varies. If a trout finds a good stream or “home” and it has the necessary cover and forage, a trout could live to an age of around 12 years.

Five years ago I found such a “home”. I walked around the bend in a stream and it was before me. It is a *WOW* hole. A *WOW* hole is one that totally screams out “Large Trout Home”.

The top of the hole has a current line for oxygen and feed source. The hole itself is an old farm field bridge that has caved in ages ago. The boulder at the base of the bridge causes a severe step drop in depth. A step drop is where the depth of a hole goes from 2 feet to 8 feet deep in about 2 feet distance. 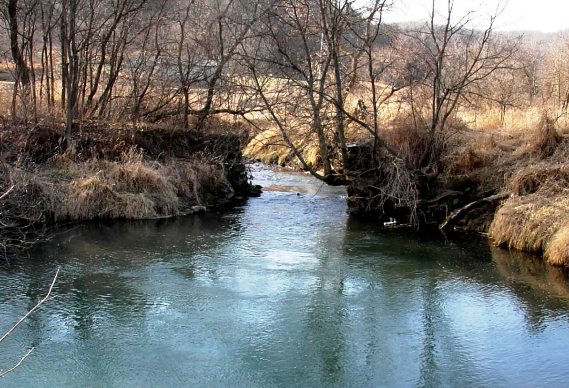 The rest of the hole has some cover on the left and a couple ambush points for The Curmudgeon to attack his prey. The hole is about 8 feet deep in the center. This allows the trout to stay in this hole year round.

I scouted the hole from downstream in a crouched position for a short time. It was March and the vegetation was limited. I watched the water. I saw no obvious feeding action.

This hole was so far off the main roadway it screamed Large Trout. It was way too far of a walk for the casual angler.

I thought for a long time how to attack this hole. The water was cold in March, so any possible large fish would be in the slow moving deep water. I needed to make a cast way up into the current to hide the splash of my cast.

I was worried that a smaller fish might spook the hole first and I would not have a chance at The Curmudgeon. I figured if i was going do it… It would be on the first 5 casts.

I casted for an hour at the hole with not even a whisper of a fish in the hole. From my experience, I learned that Old Male Trout are very territorial. When they are really old they chase ALL other trout out of the hole. They are Crusty and Ill Tempered.

After the hour I decided to walk out into the hole and carefully map the bottom for structure. The best way I knew was to actually wade the entire hole. I started at the edges and worked my way to the fast water funnel. The fast water funnel end was clearly over my waders so I poked my pole into the depths. Something flew out of the depths and did a circle in the hole and then stopped on the other far side of the hole.

From the wake the fish made in its circle..It was obviously a Big Fish. I had thrown the kitchen sink at this fish and had not even gotten a bump.

I visited this hole annually for five years. About ten times each year. I varied my casts. I varied time of day and night. I even sat on the hole in the middle of the night. I caught NO trout.

Last fall I was talking to a friend about The Curmudgeon. He asked what I had tried so far. I told him all of the tricks I tried. He asked me if I had ever tried to ANGER the trout. Make it so angry it would hit out of anger. I had my friend tell me what he meant by that.

He said that an Old Trout that big would be territorial and if I casted in and ripped the presentation through the hole at 100 miles an hour… I might anger it enough into hitting. I had tried everything else… So what the heck. 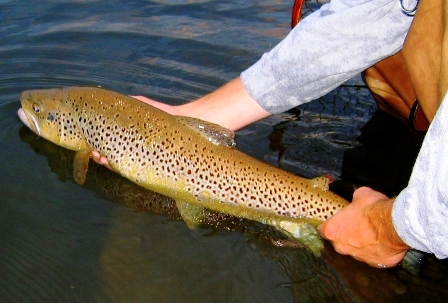 Second cast…..was bringing it as fast as I possibly could. It slammed it. It went deep and hunkered down on the bottom. After a change of direction battling it, I got it to the top of the water. I was not disappointed. It was well worth five years of hunting this fish.

I dubbed him ***The Curmudgeon*** and sent him on his way.