A passage from “The Stream of Time”…

I need to give a little background to begin the story. Recently I have been doing lots of presentations at schools to encourage young people to take up fishing. Along the way I was asked to speak at some nursing homes also. I have spoke at 5 now and have a couple more scheduled. My wife use to work at a nursing home and she thought it was a good thing for the retired folks. She called it bringing the trout stream to them.

I spoke at a nursing home this morning. The place I was to speak was the chapel area. I always go early to my presentations to make sure everything is set up properly. When I arrived today I went directly to the chapel. The power point equipment was all set up. There was one resident in the chapel. Her name is Alma. She was quite talkative and she gave me some family history.

Alma started out talking to me complaining that my presentation was getting in the way of her time to pray. I explained to her that I was giving a presentation about trout fishing. She said: “I had my fill of anything fish related from my husband.” He died 12 years ago. He was a crazy fisherman. He went out every moment he could fishing. Alma told me “No thanks” and she wasn’t going to sit in on the fishing show. 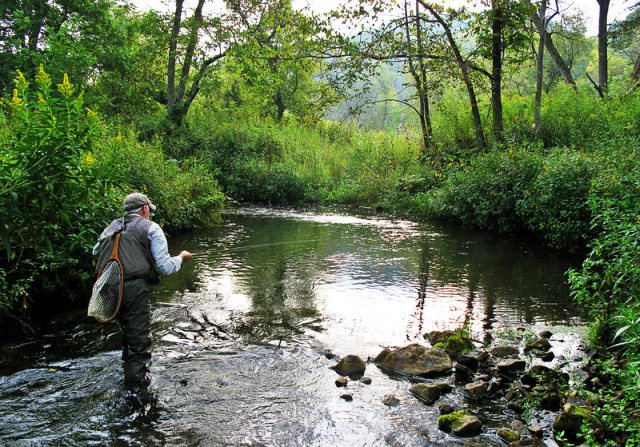 I really wanted her to see my presentation. I told her that it wasn’t only about fishing. There were wildflowers and many beautiful outdoor photos in the show. I worked on her for about 20 minutes and she finally gave in. She shared with me why she had such a dislike for fishing. When she and her husband were first married they were kind of poor. They lived on wild game and anything that swam.

Her husband Albert would come home from fishing and walk all over the house with his muddy boots. Fishing meant relaxation for Albert but it meant work for her. She would have to clean the house after his nonsense. He cleaned the fish right on the kitchen counter and made one heck of a mess. Alma was always happy when he brought home trout instead of pike because pike meant scales and they were all over the kitchen. He cleaned them and she would always have to follow behind him and clean the sink and the floors.

By the time he was done cleaning the fish and traipsing outside he was tired and he would just put those muddy boots anywhere he pleased. Fishing equaled to mess in her mind. He had asked her numerous times to go along with him. She had gone with him a couple times when they were first married. It just wasn’t her cup of tea. Fishing meant wood ticks and usually she ended up muddy and wet.

She said she ate so many fish through the years she thought she might even grow fins. Alma was a tough sell and was sneering most of the first few moments of my presentation. I directed my attention to the other residents that were watching and made eye contact with them more than Alma. About half way through the presentation I noticed something really odd. Alma’s facial expression had changed to a big smile and she was hanging on each word and photo. Near the end she changed her facial expression again. She was wiping away tears and the aides asked her if she wanted to go back to her room. She responded with a resounding “NO”.

My presentation was over and she sat there a while I straightened things up and helped put away some chairs. I went over and sat by her and we talked again. She was still weepy. She asked if I had anymore fishing stories I would share with her. I talked to her until it was time for her to go to lunch. She thanked me for coming and aides were wheeling her away and she looked me right in the eye and tears were flowing and she said: “What I wouldn’t give for just one more time to clean up that old fool’s muddy boots from my kitchen floor.”