All outdoors folks have dreams of the perfect deer hunting place where the twelve point bucks are plentiful and there is a stream that runs through the center of it with many eager trout. The area must be remote and not hunted much and devoid of other anglers. Hardcore trout anglers have a life long quest for such a spot.

This stream may have a correct name for the dreamers but it is typically not called by name by these secretive trout nuts. It is whispered and coveted by these protectors of the trout grail. Most would give you their first born child before they divulge their “Brigadoon” creek. Every county has a Brigadoon Creek. 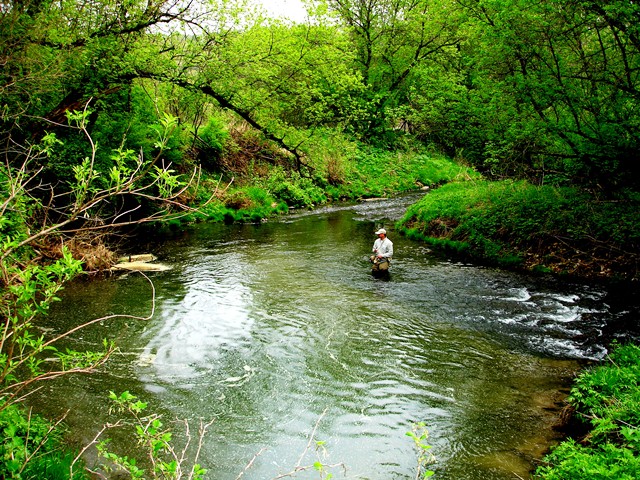 For those of you that are not familiar with the term “Brigadoon” creek I will elaborate. Every trout angler worth their salt is in search of the perfect stream their entire lives. If they think they have found it they replace the real name of the stream to hide its location in case of prying ears ever hears them talk about it.

The origin of the “Brigadoon” handle comes from an old movie. Brigadoon was a village in the mountains that only appeared once every one thousand years. It stayed for a week and then disappeared for another thousand years. It was an unspoiled place. The village was from the olden days. The folks were simple folks and were satisfied with their life. The place was mythical and only dreamers dare imagine it.

Last year about this time I had brunch in New Glarus with my family. I typically go to New Glarus every weekend that there is a free fishing weekend. Wisconsin has this so out of state anglers can come and fish Wisconsin without having to buy a license. The streams were typically overrun with anglers on this weekend and I pass on trout fishing elbow to elbow. Everything was going like normal. The food was great and the ambiance was even better. My wife and I were sitting there soaking in the Swiss heritage and the excellent food when it happened.

Two white haired gentlemen sat in the booth along side of us. I guess both of them in their late 80s. These men had not seen one another for decades and were talking about everything under the sun. I listened to their conversation as I ate. The two talked about friends that had passed and their escapades as young adults. The conversation then changed to a subject dear to my heart. These two old sages were talking about trout fishing. I quietly told my family to keep their volume down because I wanted to hear what these two old trout slayers were talking about.

I felt a little bad about listening to their trout stories without them knowing but I was enthralled with what they were talking about. They were talking about their “Brigadoon Creek” that they had discovered as children. They stumbled on it by accident. There were trout everywhere. It had steep walls, almost like canyon walls that were formed over hundreds or thousands of years and it was a mini version of Rock Creek in MT.

I tried my hardest to hear where this mythical stream was. I gleaned from their conversation it was close to New Glarus. They didn’t even fish the upper section where it forks to the left and goes into a secluded road less area that is completely untouched. My curiosity got the best of me and I stood up and introduced myself to the two ancient anglers.

Brunch lasted much longer than typical that day. The two long ago gave up trout fishing and they were pleasant and they gave up the location of their “Brigadoon Creek.” We shook hands and I thanked them for their valuable information. One of the old sentinels of trout told me to take a net with me because I would need it. The other told me the stream even fished better in the fall due to the big trout migrating to the stream to spawn.

The drive home was long. My wife and I were skeptical about the actual location of this Montana like stream in Southern Wisconsin. The next day I went on a quest to find the stream of dreams. It was quite a drive and after 3 hours of searching I couldn’t find it. I went home defeated. I stored this information in my log book for 2012 and moved on. A couple days ago I re-read my logs for 2012 and I decided to search a little more for this trout nirvana. My wife and I went over some maps and we decided I was one valley over too far. Brigadoon Creek was there and another crusade to the stream was needed.

I hit the road at 4:30am this morning. The sun was up for about 40 minutes when I arrived. This magical stream was a tributary of a well known creek in the area. My directions from goggle maps said 5oo yards upstream from the bridge it fed in to the main branch. I walked for 2,000 yards upstream and all I found was an old dry creek bed. I was a little angry at first but then I did eaves drop on the conversation so I had no right to be mad. Maybe the dry creek bed was Brigadoon Creek and I just need to wait another 1,000 years before it appears again.

Trout anglers are dreamers. I will find my own Brigadoon Creek some day.