Okay Fishidy fans. Get set for a wild ride. We’re sharing our “Bucket List” of fishing trips with you over the next three weeks…AND, we want to hear yours too. After you’ve had a chance to read our blog posts (three-part series), go to our Facebook page (www.facebook.com/fishidy) and click on the contest tab for your chance to enter to win a $100 Bass Pro Gift Card just for voting for your favorite fishing trip and sharing your own fishing bucket list adventure.

Driving through Central Illinois isn’t, let’s say, the most exciting drive in America. No offense to our friends in the Land of Lincoln, it’s a beautiful state filled with many great anglers. It just doesn’t have the elevation change or vegetation that I prefer. So recently on a trip from Wisconsin to Indiana with one of our contributors, Jordan Truttschel, and after boredom set in with ESPN radio, political debate, and of course fish “tales”, we got into one of angling’s most interesting and personal topics…the fishing bucket list… aka…the compilation of destinations or experience that we absolutely MUST fish before we “kick the bucket.”

Both Jordan and I have been lucky enough to fish many great fisheries throughout the nation through college fishing tournaments, “detours” on business trips or family vacations. Salmon in Alaska, bass on Kentucky Lake and tarpon in Florida, are just some of the fishing experiences we’ve been blessed to participate in.

However, we both recognize we’re in our infancy when it comes to achieving our fishing goals. For that reason we came up with seven fishing experiences that all anglers should check out. We further validated many of these experiences by studying the detailed Fishing Hot Spots mapping available on Fishidy.com.

In this post, we’ll be covering two species: smallmouth bass and muskies. Let’s start with the smallies. Dale Hollow Reservoir is located on the boarders of Kentucky and Tennessee.  It’s considered the best smallmouth fishery in the U.S. (which is highly debatable) to many of the southern pros, and it’s on the 3rd cleanest lake in the USA. Many fish in the 5+ pound class are caught regularly here with the record being 11 pounds, 15 ounces.

This place combines two of my favorite parts of fishing into one during the March bite, jerkbaits and smallmouth crushing them!  They’re also big on crankbaits and spinnerbaits for these Dale Hollow smallmouths. It’s also a place I can escape to during the harsh winters in Wisconsin. The best months for fishing are November through April, with March and December being the most productive months of the year.

The lake structure is perfectly designed for smallmouth! Bottom compositions at Dale Hollow are broken rock, boulders, gravel and sand. There are many bedrock outcroppings found along the lakes shorelines, as well. As mentioned earlier, the water quality is very high, and this is due to the lack of development around the lake. Another contributing factor is its remote location. This makes this lake a dream destination because of the massive size of the lake along with the never-ending structure. It doesn’t hurt that there are massive smallies in there either!

I chose the Boundary Waters in Northern Minnesota. Hundreds of thousands of acres of interconnected water with no motors, no fish finders, and if you come across two or three other anglers on the water, it’s considered a “busy day”.  It’s definitely not the most relaxing fishing experience. You often have to paddle many miles to find the good fishing holes. However, if you’re willing to put in the work, it can be quite rewarding with 100+ fish days, many being trophy fish. You can also stumble upon walleyes, pike and even lake trout. Because there are so few maps for this area (please feel free to add your spots on Fishidy!), you really need to utilize sight fishing and fish visible structures. When all else fails, look for many of the large rock outcroppings that go into the water.

Smallies love rocks and the boulders provide great cover and access to bait fish and insects. If that doesn’t work, head for one of the thousands of islands and look for gravel or downed trees. Pitch plastics, throw crankbaits or spinners — it doesn’t matter, these fish aren’t picky. Keep your eyes open, while you may not see many people, there are plenty of opportunities to take in some wildlife, moose, bear, deer, bald eagles and loons are quire common. 68,000+ acres, 490 islands, 400 miles of shore, bays, channels, weed beds, drop offs and clean, clear water all adds up to some seriously amazing muskie fishing.  Eagle Lake has been an up-and-coming lake in the muskie world for quite a few years now. It’s located in the Northwestern portion of Ontario, which has been in the crosshairs of muskie fishing. There have been three muskie boated in Ontario over 60 pounds, two of those were caught in Eagle Lake.

Muskie are common in the 22-42 inch slot, a little less than common in the 42-49, and fish over 50 inches are caught occasionally with a few exceeding 53+ inches in the last few years. The number of fish caught throughout the week depends on lake and species knowledge, but they say if you fish exclusively for the fish of 10,000 casts you should be able to catch 3-4 per boat on an average day!  Obviously, this can depend on a number of factors, such as weather, but you get the idea.

Eagle was one of the first lakes in Ontario to implement an under 54 inch catch-&-release law. In essence, every fish caught in the past 15 years has been released back into the lake. The increase in population and mean size has many governmental biologists claiming that the next World Record Muskellunge will come from Eagle Lake! Talk about city limit fishing! This 270K-acre fishery is located just outside of Detroit, MI. You can fish in the morning and take in a Tigers game in the afternoon. The Lake St. Clair system, which contains Lake St Clair,

St Clair River and the Detroit River, has more muskies per square mile than anywhere else in the world. Some reports have listed 50,000 muskie over 30” in Lake St Clair. So the chances of catching a trophy are pretty high.

Trolling the flats is a great way to catch a trophy and the most common, especially pulling planer boards and plugs. Don’t underestimate casting, as you can hit the submerged vegetation in hopes of hooking the fish of a lifetime. Zebra mussels have made the water gin clear at times, so when casting you can often see the fish explode on the lure. Like many northern lakes, the best action tends to be in late summer with the biggest fish caught in the fall.

Stay tuned for parts 2 and 3 of this blog for walleye, largemouth bass, panfish, salmon/trout, saltwater species and an exotic fishing location. And, don’t forget to enter to win the Fishidy Bucket List Contest at www.facebook.com/fishidy. Just go to our contest tab, vote for Brian or Jordan, then fill out the form with your own fishing bucket list adventure. The winner will get a $100 Bass Pro Gift Card and some cool, Fishidy gear! 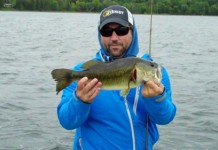 Weekend Wrap Up – FISH-SANITY Is Upon Us!