It is improbable that someone would take an extended trip to an unfamiliar destination without a map. It would certainly be a waste of time, money and effort. Worse yet, the person runs the risk of becoming lost. Yet lots of fishermen fish new waters without a map.

As a highway map shows you precisely how to arrive at a desired destination, lake maps show you probable fish-catching spots and how to get to each one.

But a fishing map tells you many important things long before you arrive at the lake. Maps mark marinas and boat launch areas. You can pick the one that is most conveniently located to your route, the one closest to the areas you want to fish, or the one located in the protection of a sheltered harbor.

A map helps you determine what kind of fishing gear you need. If, for example, the map shows extended ranges of flooded timber, you should bring a medium-to-heavy action rod and a reel spooled with tough fishing line. It would be tragic if you hooked a record bass only to have it break off in submerged tree limbs because you spooled 8-pound test line rather than 20-pound test.

A map also designates depths. If you decide to fish a reservoir like the famous Lake Fork in Texas, a map of the diverse lake suggests you may have to fish a variety of depths before you locate largemouth bass. That means your tackle box should have light-weight baits designed to work the surface and relative shallows. If you do not find fish in the upper levels of the lake, you will have to cast deeper, off the deep points and perhaps even drop down to the old creek channels. That means using heavy, artificial lures like 3/4-ounce jigs, lead slabs, and Texas-rigged worms.

On the other hand, if you are going to fish Florida’s Lake Okeechobee which is mostly shallow water with slowly tapering drop-offs, you will stock your tackle box with crankbaits, light-weight jigs, unweighted plastic lizards, centipedes, and short worms. An abundance of vegetation symbols on the map means weedless spoons, spinnerbaits, and unweighted worms.

Careful attention to a map before going on the water allows an angler to select proper gear. The prepared angler spends their time on the water catching fish, not off the water hunting for a proper rod and reel, or combing tackle shops looking for the right baits.

Do not assume the casual, recreational angler is the only one who analyzes a map before fishing. Before making a cast, expert fishermen and seasoned tournament pros study lake maps with the intensity of an Ivy League scholar.

Why do the experts study maps before they hit the water? To develop a plan. They fish more efficiently and effectively by using a map to evaluate a lake and then develop a strategy based on such factors as the target species, type of water, and time of year. By knowing where you are going to fish before leaving the boat landing, you go directly to the spots with the highest fish-holding potential, you don’t have to race around randomly looking for a good place to fish.

The most important benefit of using maps to pre-plan is eliminating unproductive water. By combining basic knowledge of fish with information from a map, successful anglers arrive at the lake prepared, catch more fish, and have more fun.

Pre-planning with maps has obvious benefits when venturing to new water, but it also can improve your catch on familiar waters. Perhaps your once-secret honey hole is now the most popular spot on the lake. Many times productive spots on a favorite lake just stop producing fish. Maybe a sunken brush pile finally deteriorated and rotted away, or a terrific weed edge is no longer evident, or perhaps water levels or clarity have changed and altered fish patterns. Whatever the reason, you must find some new spots. Using a good fishing map will certainly help. By studying a map, you can quickly locate spots similar to those where you have consistently caught fish.

The Proof is in the… Map

The following experience illustrates the value of studying maps before getting on the water. The relatively small amount of time spent preparing will pay back big dividends with more fish in the boat.

Bob Kline is one the country’s best muskie fishermen. Huge, mounted muskies line the walls of Kline’s recreation room. He has spent his life studying and catching muskellunge.

Some years back, Bob accepted a challenge. Could he fish a lake he had never before seen, in a part of the country he had never fished, and catch a 30-inch or longer muskie within three days? If you are a gambler, that’s not a bet you would take. Muskies, sometimes referred to as the fish of 10,000 casts, are not easy to catch, much less from a lake you do not know.

The first thing Kline did in preparing for the challenge was obtain a contour map of the selected lake. He highlighted a sequence of features – rock reefs, sharply shaped points jutting into the lake, underwater humps and irregularly shaped shorelines on the map. Those features near exceptionally deep water received top priority consideration.

Before making a cast, Bob motored over each one of his selected areas. He kept one eye on his depthfinder and the other on the contour map. When the depthfinder showed a sudden change in the structure or weed growth in the area, he marked his map.

With his own marked map, he then systematically cast each pre-determined spot. It took nearly two days for Kline to work the lake, but at 6:00 p.m. on the second day he boated a muskie that weighed 27 pounds and measured 47 inches in length. He caught the fish off one of his marked underwater humps.

Bob Kline proved that careful analysis of a map, coupled with knowledge and persistence, catches fish. “I would never have attempted a stunt like that without a map,” Kline stated. Even the experts find maps indispensable. That is one reason they are expert anglers. 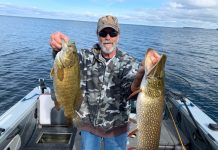 How to Get Your Boat Ready for Spring 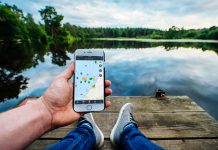