On March 15, 2013 Spring break of my sophomore year of college began.  Being an angler from the north, and on a college budget my options were limited.  Some friends of mine from Illinois had been discussing their plans, which involved fishing a power plant lake near their hometown.  I had heard about power plant lakes, but never had the opportunity to fish one.  Naturally, when they extended the invitation to me I accepted.  This particular power plant discharge, La Salle Lake, is located in Marseilles, Illinois.  It serves as a cooling lake for a nuclear power plant.  We started off the trip with anticipation of getting a largemouth fix.  Since the friends I went with had fished the Lake multiple times, one being for the Illinois High School Bass Fishing State Tournament, I felt confident that we were going to have success.

We launched two boats and set out to try and boat some fish.  The air temperature was in the low 40s, and the water temperature was in the upper 80s.  The same rock riprap surrounded the entire lake.  In the early morning, we threw top water lures like buzz baits and Zara Spooks.  With having no luck on those presentations we switched to shallow diving crank baits where I had a few channel catfish inhale the sexy shad colored square bill.  Still without success on our targeted largemouth species I decided to switch to one of my favorite lures, a football jig.  After a few casts I finally hooked into a smaller largemouth.  Soon enough we were catching striped bass like it was our day job.  We could not keep them out of the boat.  Although we weren’t catching our desired largemouth we were still having a great time putting our reels to work.  Some of these stripers were pushing 4lbs, which I find to be pretty good sized for that species. 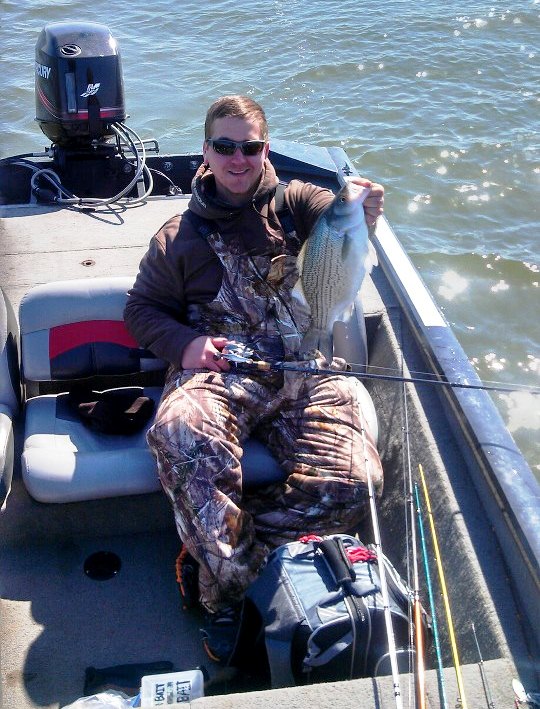 The day ended bittersweet. We caught a ton of fish, but not the ones we were going for.  However, any day of fishing beats a day of doing anything else.  For someone looking to take an early spring fishing trip on a shoe string budget I would recommend taking a trip to a power plant discharge like La Salle Lake.  It is a great experience and an ideal drive for anglers especially from the north.  The warm water temps make for comfortable fishing conditions, and the diversity of species keeps you guessing what the next one to bite will be.

Authored by Jake C.
Connect with Jake on Fishidy