I met him about a dozen years ago. It was when I first began guiding. He showed up with two different rigs. One was a brand new 5 weight rod and 6 weight forward line.

The other rig was a yellow fiberglass spin rod with a really old zebco 404 on it. I guessed the spinning rig to be 25-35 years old. I looked at it a little closer and the line was really old and had permanent coils in the line. The rod was terribly soft and it looked like the wrong tool for the job. So he strung up the 5 weight and off we went. Before we got to the water he told me he was new to fly fishing and had never fly cast. Day one was a nightmare. Right on my website I told prospective clients I was not a fly cast instructor and they were to have lessons before they fished with me.

My claim to fame was to be able to turn folks on to big fish. There were no big fish the first morning. In the afternoon I thought we would give the spinning rod a whirl. The line was 12 years old I learned after he deposited a dozen panther martins in the bottom of the stream. This ancient reel was closed face and had a very poor gear ratio and you had to reel 100 miles an hour to keep the spinner off the bottom.

Midway through that day I handed him my open faced shimano rod/reel and taught him how to use it. He tried to cast it upside down at first and he was certain the handle was on the wrong side until he scored his first trout. He was as proud as a peacock. 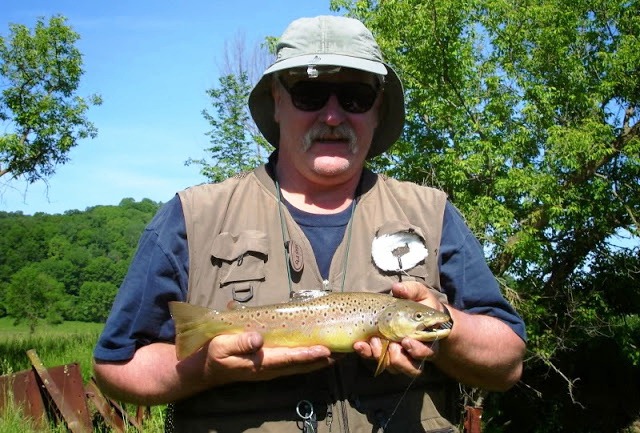 He was camping locally and took that trout back to his campsite and fired up that trout. He called me that night and told me how good the trout tasted. He wanted to know if I was available for the next morning. I was a little bashful about taking him, but he finally told me he had gone to Walmart and picked up some new 8 pound test line and he was more prepared. This fact made me say yes to take him the next day. We met at the campgrounds and looked at his new line. It was the clear blue type that I disliked because it almost glowed in the water. I looked at his reel and he had over-lined the reel so I peeled off about 30 yards of line so he would not blow an air knot every cast. The reel still sucked and he needed to reel it at 100 miles an hour to keep it off the bottom. I took him to where there were some brooder bows released. I thought they were pretty dumb and he should be able to get one of those. The waterway rewarded him. 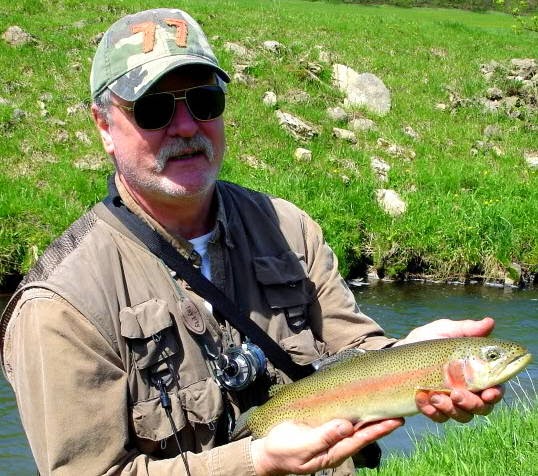 The next winter came and the phone rang again. It was him. I asked him if he had gotten any fly casting lessons and he told me he retired that rod and reel already. He also told me he had the same old spinning rod and reel with new clear line on like I advised. I told him I was available for one day and one day only. I took him to a little more difficult casting area this time because his casting skills had improved. This old spinning reel still was a pain because it ran the lures in to every snag near the bottom. I broke out my old spinner box for him. The ones that were a little less shinny and were used a few times and I would not be so angry if he lost 2 dozen of them. He managed to lose all 32 spinners from my old box that morning. The afternoon I picked a more shallow stream where he could wade in and unhook any snags he got. That soft fiberglass rod was still a serious pain to control. I would tell him where the fish were and where to cast and it seemed like every cast he made he would slam the spinner right down on the area I told him they laid in and not upstream like I wanted. He finally got the yellow rod to respond to his wishes. He then decided to use the push button on the zebco to stop errant casts. I told him that was a bad idea because the teeth on the closed face would chew up his line. He lost a couple fish before I figured out what he was doing. He finally tied into a good fish. It was no easy fish. When he hooked it… it stormed back at him and he was unable to control it with that stinking yellow fiberglass rod. It literally ran between his legs. I had to feel down the legs of his waders to find the line and net the fish. It was a perfect 20 inch fish. It went home with him and is on his living room wall now. 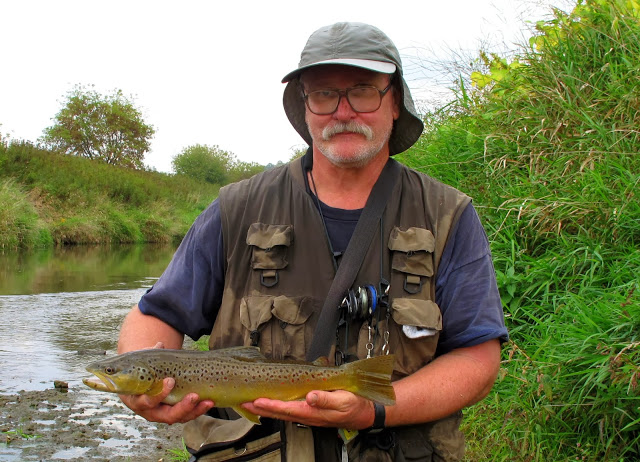 His accuracy at casting was better, but that gear ratio still bugged me. He did manage a decent trout so he was happy. I quit guiding after that year. He kept calling me to go fishing the years after. He grew on me so we went out as fishing friends not as guide and client. He still had that dang yellow rod and old zebco. I picked on it every chance I got. It was the last day of the season and I told him about this giant trout that a couple of my friends had lost. He wanted to go right there. I tried to talk him in to my shimano rig and he declined. It was a long wade to the hole. I let him have the hole first and his first cast ended up on the left bank. 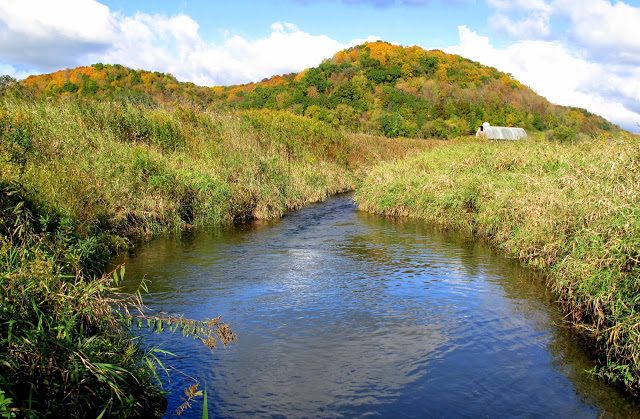 His second cast was true. This old zebco and backboneless fiberglass rod were about to be abused. The spinner was almost to shore and he was lifting the spinner up and it hit. He set the hook. The fiberglass rod bent in half. The trout on the end of his line was 5 inches from shore and it started to appear… and then more of it appeared. I swear on my father’s grave that this fish was between 30-32 inches long and a female brown with lots of small dark spots. It was the biggest small stream brown I had ever seen in my life. It was over before it began. The fiberglass rod was sooooo wimpy it could not get penetration in to the jaw of this ancient brown. The lure flew over our heads. When browns get older their jaws get rock hard and a stout rod is needed to get lure penetration. We both sat there for a while and discussed what had happened. He was visually shaking. The adrenaline rush was so enormous he wanted to cast in again right away. We sat there for a while because I told him the hole needed to calm down. He left that afternoon home sad. The phone rang again the next winter and then for about 4 more winters. The boy grew on me. He got rid of the yellow flimsy fiberglass rod and bought a new closed face reel with a much better gear ratio. We fish regularly these days and last season near the end of the year he and I had a 50/50 morning with browns. 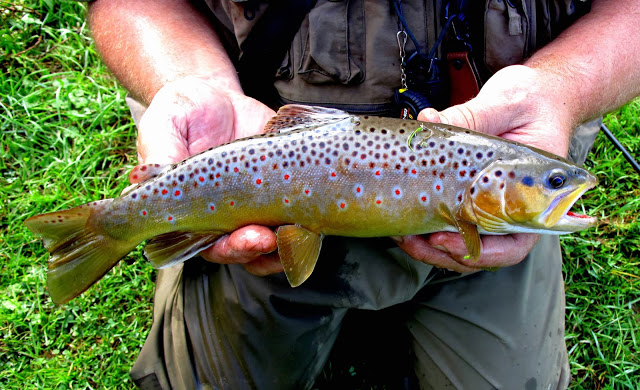 He is quite an accomplished trout angler these days.

I am still holding out hope he buys a good shimano stradic and medium action spinning rod for 2014. 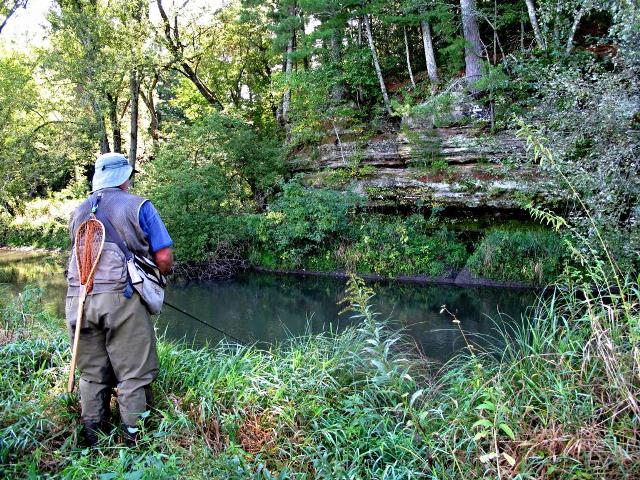 He is good enough to handle XL fish now so a bigger net is in order.

I introduced him to my big trout water in 2013 also.