The Fishidy Blog
Home Fishing Stories The Sure Thing

My friend from Pennsylvania was visiting Wisconsin.  He told me he had a morning to do some running and gunning.  He just wanted to catch a couple fish and be on his way back to PA.

He wanted easy access and a nice place to fish.   The below hole came to mind.  He was a little bit of a “doubting Thomas” when I showed him the run. 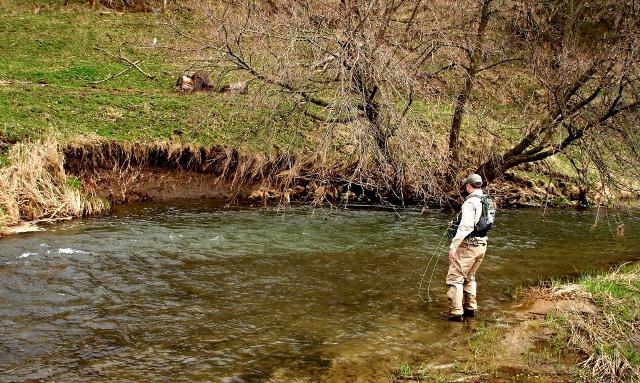 He strung up his three weight the way I explained.  Again he thought me to be a bit crazy.  I explained to him that he should fish a size 10 turkey leech through there with an indicator.  He refused the indicator and threw the leech in the hole 30 times and wanted to move on.  He also has a 5x leader on and I asked him to size up to a 4x minimum.  He was set in his ways and said he could handle any fish with 5x on his 3 weight. He said it was a worthless hole and he didn’t get a single bite in the hole.

I told him that I had seen a video once that proved to me that fly anglers miss 40 percent of their hits because of the lack of an indicator.  After a little of coaxing he put on a “bobber.”  He was old school and anything that looking like fishing with bait was against his belief system.

I explained to him that my father had showed me this hole as a small child and he always used a piece of cork on the line here on his fly rod with a crawler and always kicked trout tail.  The trout stacked up just below the step drop.  They were always big fish at the top and small tail end charlie at the back.  That was the pecking order.  They line up just like they were waiting to go to a movie. 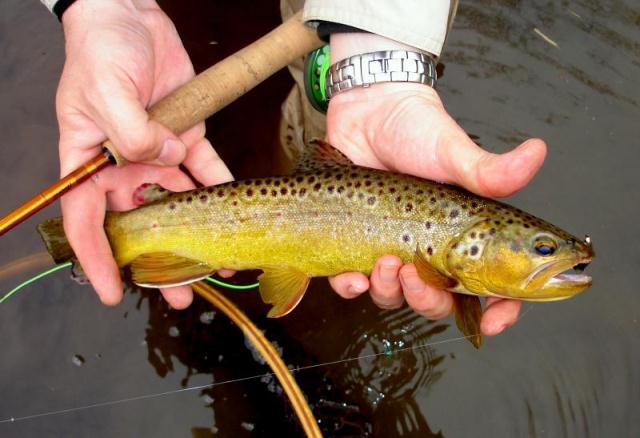 Many years of fishing the area had taught me the lay of this hole.  If I fished a hole hard and believed I was not going to catch another fish in a hole, I would walk in to the hole to map the bottom for a return trip.

That mapping told me that the corner directly above this hole swung the current in to the bank and eroded the bank under that tree and there was a serious step drop there.  The Alpha trout typically has the top of the hole at the tight step drop.  It has the bank to break the current and is in the best feeding lay. The current also magnified the size of fish in the hole and under gunned anglers usually left with their tail between their legs.

My buddy from PA “Mark” swung “my” fly I gave him tight to the right bank about 15 feet above the hole.  I was getting preachy and told him to keep it tight to  the right bank because the alpha trout would be there.  He gave me this blank stare and said something again about this being a worthless hole.

Then it happened.  He wasn’t even paying attention to the indicator and I screamed bite! bite!  Mark’s reactions were slow, but he did have a hook up for about a half second and broke off his 5x leader.  We got to see the 18-20 inch brown at the surface and he was sick because he broke off on it.  I explained to him the current magnification I told him about prior.  The current was fast in the hole and told him he needed to keep his line short or he would miss bites with a big belly in the line. He started listening to every word I said then.

5 minutes later and a 4x leader on he wanted to throw back in there right away.  I told him to let the hole calm down.  That big fish flashing on its side when it was hooked surely alerted any smart fish in the hole and it was best to wait.  We actually sat down and talked about the hole.

I explained the bottom to him.  He was very attentive now.  He wanted to know how I knew exactly how the bottom laid.  I explained to him my after fishing mapping trick.

This hole was an unusual hole.  The water was shallow upstream and there was an obvious bend that shot the spring floods in to the bank directly above the tree on the right.  The tree roots kept the bank solid so the water bounced back out.  I pointed at the bottom above the hole.  The bottom was rocky and not silty so I told him more than likely the hole was that way too.   That spring flooding had a bounce back to it also.

He wanted to know what a bounce back was.  The current slamming in to the hard bank with the tree roots stabilizing it caused a bounce back effect and the beginning of the hole was much farther out from the bank than one would think.  There was almost a wing dam there because of the bounce back.  I showed him the color difference in the hole and he could imagine the wing dam effect from the water color.

This step drop ran a good 8 feet from the bank out in to the main channel and the current going under the tree also ripped out a good place.

3 hours later and 20 trout from the same hole, Mark was sold on strike indicators. He broke off one other large fish that took him in to the roots and his 3 weight didn’t have enough backbone to turn the fish out of them.  We talked about that tree eventually falling in to the water from the floods.  I explained to him that that little tree was at least 20 years old and Mother Nature is better at making trout streams then any back ho or pallet maker. 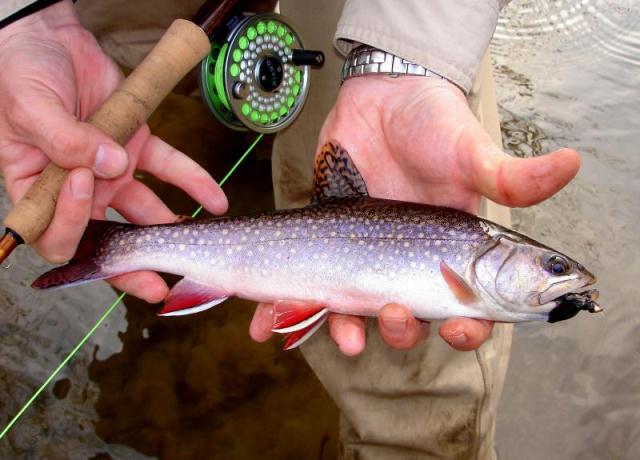 Mark questioned me if maybe we were directly behind the stocking truck because of his outstanding luck.  His smile was huge when I told him the fish manager from that stream did not stock fish.  Mark left to PA after just one hole.

The really sad part of this story is the landowner sold the rights to the WDNR and they manicured the area and that tree was one of the first things they took out.  The hole is utterly worthless now.