The Fishidy Blog
Home Fishing Stories The Stream of Time

I was startled awake by the alarm clock. I couldn’t figure out why the blasted thing was squawking in my ear at 3:00 a.m., so I sat up and reached across the bed to turn the infernal thing off. As I laid down to go back to sleep my bride of thirty-nine years elbowed me and said: “Get out of bed, you old fool.” I responded: “I am retired now, I thought we threw that alarm clock away!” to which she replied: “Len is expecting you at four.” It then dawned upon me “I am going trout fishing today!” I sprang from my bed.

Sprang is a relative word. As sprang as any 62 year-old, recently retired school teacher can sprang, today was the day. I was going to re-introduce myself to my childhood passion — trout fishing. I quietly left the bedroom and started a pot of coffee. As the coffee brewed, all the memories of my childhood fishing rushed over me. The day I was bitten by the trout fishing bug. It seemed just like yesterday. I have played that memory over and over again in my head many times. It usually happens when the first cold snap hits in late September. 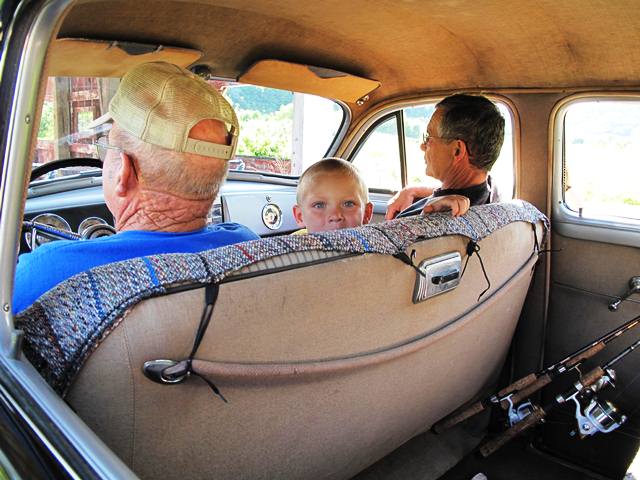 Dad rolled me out of bed at the crack of dawn. Uncle Sig is already in the car, waiting. The gear is packed and all that’s left is to get me dressed and into the car. Dad hurries me…tells me that we need to be on the water before it gets too sunny. Dad turns the old Buick westward. We are on our way.

Dad and Uncle Sig are giddy with anticipation, and as they reminisce about old outings they took together when they were young Dad tells me about the first time he went fishing with his father. I had heard that story many times and smiled as he told it again…although the fish he’d caught had grown since the last time I’d heard it!

The road gets long and I nod off. All of a sudden Dad and Uncle Sig are almost shouting: “here’s the bridge”, Uncle Sig exclaims. He bolts from the Buick, gets down on all fours and crawls up to the bridge’s edge. He peers over the bridge, then crawls back and comes running to the car. Uncle Sig is really fired up. He says: “Young man, there are a couple nice browns under that bridge with your name written on them!”

My Dad places me downstream from the bridge. Uncle Sig is in the sneak position again. He crawls to the edge of the bridge to aid me in placing my cast properly.

Dad directs my cast with the aid of Uncle Sig. It seems just like yesterday. The beautiful brown trout takes my offering on the first cast. My dad and uncle are cheering me. The battle seems infinite. I land a smallish brown. My dad and uncle make me feel like that trout was the biggest and most beautiful trout they had ever seen. A farmer in a truck drove by at the same time and gave me a thumbs up as he drove across the bridge.

Man, did I ever get sidetracked.

I’ve got to get moving and meet up with Len. The time is just screaming by, just like all those years of teaching had. I had never gotten a chance to go back to that bridge. Teaching and family had washed away any chance of getting back there.

I met up with Len and we got into his truck for the trip to the bridge. I did not remember the exact area of the bridge as I was six years old the last time there and I had slept almost all the way there; I just knew a general area of the bridge. As Len drove along I tried to describe what the bridge looked like. 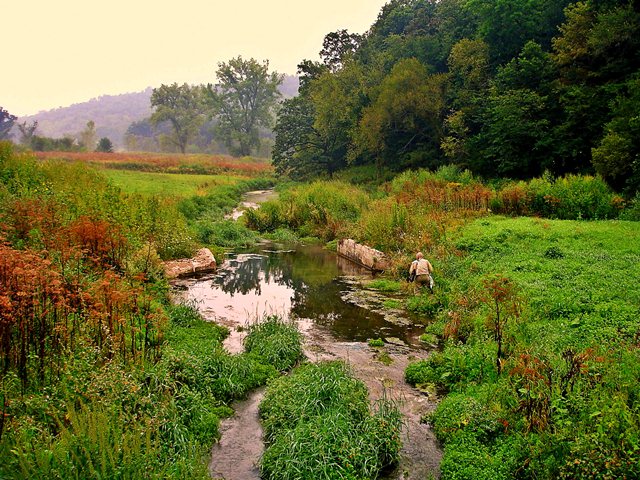 I told Len the story about my first outing with Dad and Uncle Sig. I described the bridge to a “t.” The way my uncle had hung off the bridge on his belly to direct my first cast. We searched and searched the area. We could not find the bridge. We stopped and looked at the map to see if there was a place we were missing. I was so sad. I could not find that bridge… it had disappeared. I could not talk with my dad or uncle. They both had been taken by the stream of time to where all good anglers go. We finally gave up on the bridge and turned around and decided to hit some close water.

Len slowed the truck…and said: “Peter – is that it out in the field?” I said: ” No, it can’t be. It isn’t the way I remember it. It was on the main road and it didn’t look like that.” Len told me that the county had straighten the road about 35 years ago and made a new bridge. That bridge out in the field had to be it.

Len could see my disappointment in my face. I got out of the truck and strung up my rod. I asked Len if I could fish the stretch alone. I wanted to try to re-capture some of the magic of my ancient memories. Every thing looked different. I thought to myself that this couldn’t be the bridge. I carefully approached the bridge hole…..I placed my first cast directly in the feed lane. A brown trout came up and took my presentation. I knelt down to net the brown…the memories rushed back….the bridge ruins jolted my memory.

Don’t let The Stream Of Time wash you away before you have found YOUR bridge.