The Fishidy Blog
Home Fishing Stories He Said We Should Go. The Story of a Red Canoe.

I was so young the first time my parents took me fishing that I can’t remember it.  I don’t remember the fish, the river, or the photo that followed.  I remember the Zebco 202 that was my first fishing pole.  I can still see it, green and white, dirty, leaning against the old plank wooden walls of the garage, and the bobber half attached.  I can still hear my mom’s voice reminding me as I would set it in the crotch of the stick that I had shoved in the ground that “don’t walk from that or you’ll lose it like I did that day”, referencing the memory of having her fishing pole dragged into the water while not paying attention to the bite she had.  There were many trips, and many fish, and many more that would come without my parents and with children of my own.  Fishing became my joy, my celebration, and my way to cope. 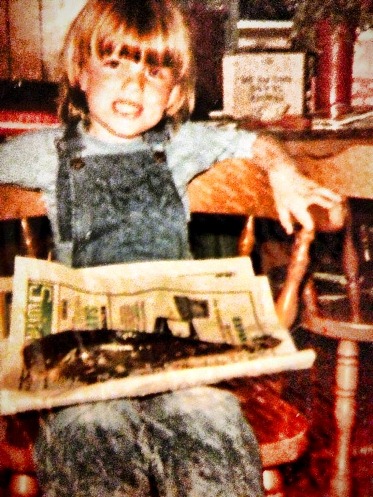 I don’t want to talk about it, let’s just go fishing.

It’s the thing that has always been there for me and my brother through those very moments.  My bachelor party was a fishing trip to Lake Steere, a private lake in NY that had served as a second home to my brother and I growing up.  It was just like it was when we were kids:  fishing, Terry’s amazing french toast for breakfast, playing cards, laughing so hard our sides hurt.  My “friends” made me row a jon boat with a kayak paddle while the rest of them fished out of boats with motors of some kind.  I caught nothing.  Our dad wasn’t able to join us because he had been recovering from lung cancer, but he said we should go and have a good time.  We did, but it wasn’t quite the same without him.

Shortly after that my Dad bought a used canoe.  It was red and had a very shady patch in the side.  My Dad was really excited about this hot new item of his.  “We’re gonna get that thing out this summer and do some fishing!” he would say while rocking on his heels and lifting his head in the air.  It became the thing my brother and I would do together.  It was our thing.  I’m pretty sure that my Dad never had any intention of actually using it himself.  I think seeing his two boys load it up in the truck and take off for a day or even just a couple hours was ultimately the reason behind buying it.  It provided us an opportunity to catch smallies like the one I’m holding below, or to just get away and talk with each other. 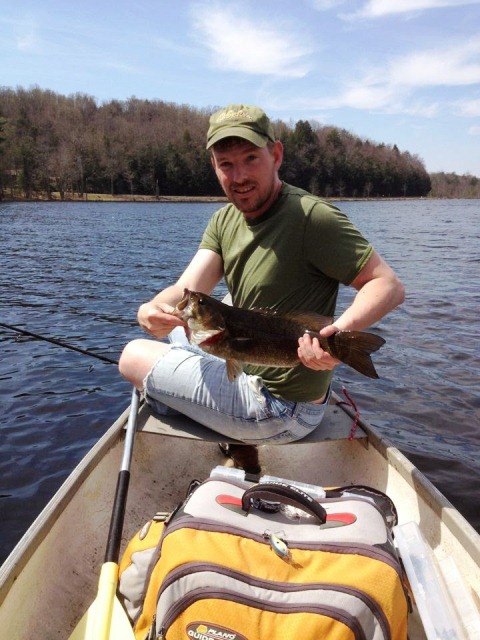 Years later when my brother was getting married we again settled on a weekend of fishing for his bachelor party at Black Lake in Hammond NY.  Known as “Nature’s Fish Hatchery”, the weekend would come to be packed with cards, steaks, beverages, beautiful Northern Pike, Walleye, Smallmouth, and the Largemouth Bass my brother is holding below.  Again our Dad was unable to go.  This time, he was dying, but he insisted that my brother and I take a break from alternating nights caring for him, to go as we had planned.  “I want you to go, Jim.  It’s important to me that you and your brother go.”  So go we did, and as it should be my brother caught the biggest fish of the weekend, and I in turn caught the picture of the biggest smile anyone would see on his face for weeks before or to come.  In that brief moment of time holding that fish, everything was right in the world.  We weren’t heavy-hearted and struggling to keep our emotions in control.  The wedding was a month later, but our father wouldn’t be there.  He would pass away less than two weeks after our trip North. 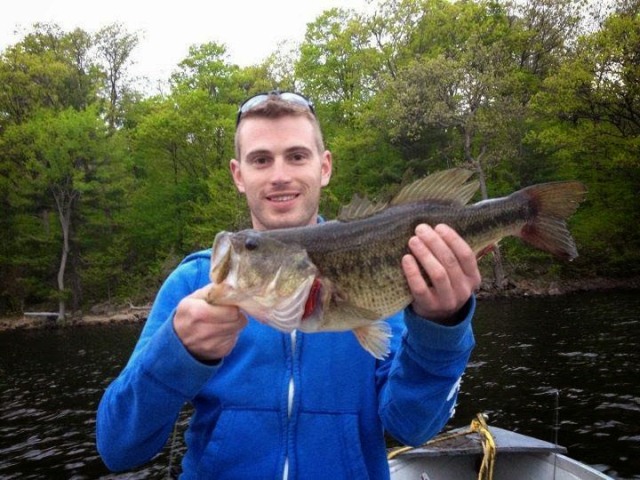 Fishing can be those things.  That’s what makes it so special, so unique.  It can be your family tradition, your lunch break, your honeymoon, your solace, your heartache, your bonding with your son or daughter, or a reason to buy a patched up red canoe for your sons because you’ll know there will soon come a time when they’ll need it.

And need each other.