I can’t remember the first time I fished Paradise Creek.  It had to have been nearly 50 years ago with my father.  I remember the stream well because it was where I caught my very first brook trout.

I remember my dad saying brook trout were the most beautiful trout in the Midwest and that they were the native species.  He prepared me for the outing on Paradise Creek before we went.  He emphasized the beauty of the brook trout and described their neon colors to me.  The look in my dad’s eyes as he talked about them showed me they had a magical quality and he held them in high regard.

This brook trout is ablaze with fall spawning colors.  Male brookies are the colorful ones to attract females.

He described the brook trout as we were on the way to the stream.  The first thing he painted a picture with words about was their blood red fins tipped in black and white.  He said they were typically smaller trout but made up for their smaller size with ferocity.  Every brookie had a unique color pattern.  The worm like swirled markings on their backs was the first thing you saw upon hook up.  Then the blood red fins caught your attention as you were fighting them.

Each brook trout has its own coloring.  They are unique almost like snow flakes.  They are nature’s tapestries.

He always described wildflowers to me and the brook trout was like a beautiful wildflower to him.  The male ones had blaze orange bellies in the fall.  He loved the red spots on their sides with light blue halos.  His descriptions of the brook trout made them special even before I had ever fished for them. 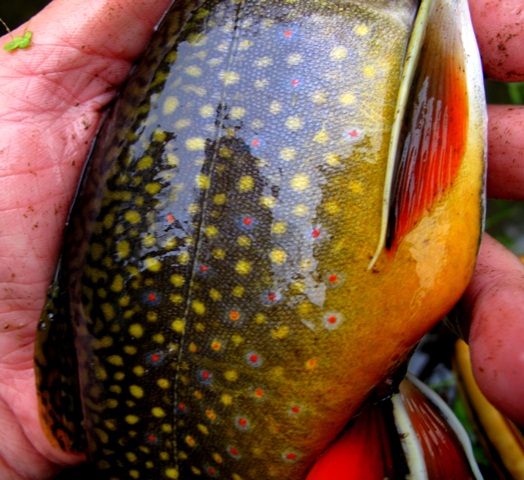 We got out at “Paradise Creek” and I was amazed when I saw how small the stream was.  I questioned my dad and asked him if the stream got bigger.  He told me “no” and this was the typical size of a brook trout stream.  Brook trout needed colder water to live in and colder water meant head water and smaller streams.  He then pulled two small rods from the trunk of the car.  They both looked a foot shorter than what we typically fished with and the reels were smaller.

He explained that tight quarters required shorter rods and pin point casting.  He explained all of this to a wide eyed seven years old and I nodded my head when he asked me if I understood but I didn’t until later in life.  I do remember the tiny rod and reels and the kaleidoscope of colors I saw in my very first brook trout to hand.

One thing that stood out about the outing was all the beaver dams on this small stream.  I could see the excitement in my dad’s eyes when we rounded a bend and saw a beaver dam. Dad always pointed out the Snake Weed or Horse Tail Rush on streams.  He told me they were a good indicator of stream quality.  Stream quality meant brook trout.  I soon learned why as I was the first to fish that first beaver dam we encountered.

Snake Weed lined the left bank of this new huge beaver dam.  This dam did not disappoint.

My dad always taught me stealth was a very important thing to learn to be a good trout angler. The beaver dam hole was no different.  He had me crouch down as I came up to the beaver dam a good 15 yards before we got there.  We got right down in the stream to lower our profiles.  We used the beaver dam as cover.  The water was gin clear and the trout had to be spooky. 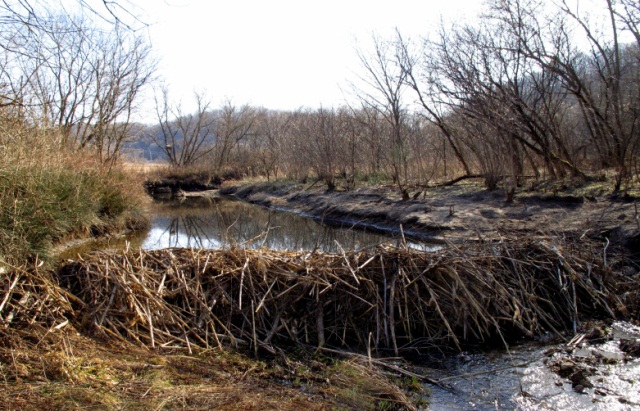 My first cast over this beaver dam felt quite awkward.  The spinner landed true about 25 yards up stream.  I started my retrieve and the beaver dam came to life.  There were at least 10 wakes charging my spinner all at once.  Twenty turns of the reel later I landed my first brook trout.  I looked at the oddly marked fish and was in awe of its colors.  My dad’s description did not do the trout justice.  This trout was about 11 inches long and my dad wowed at it as being a really big brook trout for my first ever.  We put it on our stringer.

The outing screamed by and we had 20 brook trout on our stringer in no time flat.  I questioned my dad about the intelligence of this kind of trout.  He held a high reverence for brook trout and I questioned it as a seven year old but later in life I discovered why he held them in such high regard.  It was that ferocity he loved and their amazing colors.  He loved the tiny streams and tight quarters they lived in.  They lived in the most pristine and reverent places in the outdoors.

This outing later on taught me that fishing was not all about the fish.  The fish were a bonus.  Trout don’t live in ugly places and those places needed to be enjoyed and cherished.  Those places had a cleansing effect and made you appreciate the outdoors and all its wonders.

Just a few short years after this outing my dad went to heaven to fish and I was left alone to find my own trout streams.  Brook trout became scarce in the coming years.  Other trout anglers blamed it on the over fishing of the species.  I was still young and really didn’t know the reasoning.  I was certain my dad was catching brook trout in heaven.

About 20 years ago there was a rebirth or renaissance of the brook trout population in my home waters.  They were as plentiful as they once were when my dad and I fished.  It was nothing to have a 100 brook trout day a dozen years ago.

About a dozen years ago it started to happen again.  My brook trout were on the decline.  Then some of my streams had none at all.  I stopped harvesting brook trout because of it.  I examined many of the brook trout I did still catch and their gills looked different.  They had some type of parasite attached to them.  I contacted the WDNR right away about 13 years ago.  They dismissed my worries.

Today it is 2014 and my brook trout have all but disappeared from “Paradise Creek.” The culprit has a name now and it is Gill Lice.  The decline of the brook trout 50 years ago was not fishing pressure and over harvest.  It was Gill Lice back then and it is gill lice now.  The WDNR has no solution or magic pill to treat my brook trout.

Gill lice are a copepod that attaches to the gills of brook trout and they interfere with the trout breathing properly.  A trout with lots of gill lice will die after an extended battle with an angler.

The WDNR is recommending reporting beaver dams on trout streams.  These are the breeding grounds of gill lice.  The trout school up here and infect one another.  The WDNR wants those locations so they can tear down those dams.  The WDNR is also encouraging harvest of brook trout to cut down on their numbers.  This parasite does not hurt humans and only attaches to brook trout.

The old adage of you don’t appreciate something until it is gone is once again true in Crawford County.  Paradise Creek today is devoid of brook trout.  It has a thriving population of brown trout.  Gill lice are spreading all over the state.

All of you anglers that chase the elusive brook trout know of what I speak.  Appreciate the streams and their residents.  Enjoy yourself when on stream and drink in what nature has to offer because it could disappear twice in your lifetime.