Cod fishing the winter months in the northeast.

For most saltwater anglers, the holidays are a distraction from the end of the season for most species.  Once the holidays are over, playoff football is the next distraction. Then that’s over. Then the lull.  Boat shows and seminars while enormously useful, don’t really scratch that itch.  Sometimes it’s an easy one to get to with some fishing shows on tv and a trip to the tackle shop to buy something you never needed. Sometimes you just can’t get at it.

I’ve talked about special breeds of anglers in past posts.  The rockhoppers, the skishers, the night patrol surfcasters are all ones willing to defy logic, comfort, and the elements in their hunt.  Well add another breed to that list, those that embrace frozen salty eyebrows and more layers of clothes than some people’s whole wardrobe.  Cod’s no summer fish, and this is nothing close to a nice day on the water fishing. 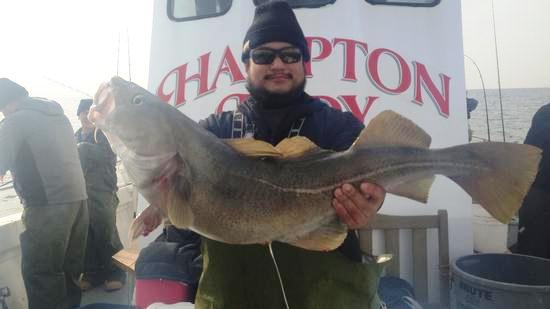 My hands have been cold enough on end of the season tog and striper trips where I couldn’t feel a barb about to bury itself in my thumb.  They’ve also been plenty warm while thumbing through fishing magazines and online sites in the dead of winter looking for that off season fix.  If you‘re willing to gear up and get cold, you just may have the cod gods smile down upon you. 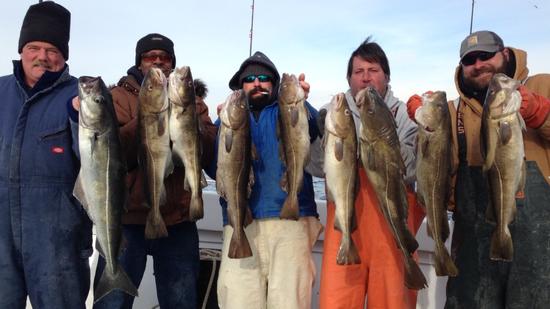 Due to violent, quick shifts in weather, and the sanity of most recreational smaller craft fishing captains the hunt for cod isn’t something you can plan or expect.  I wouldn’t be on anything less than a thirty two, with top of the line navigation and tackle, heated cabin, and a captain with salt water in his veins.  A case study in overfishing, just two generations of anglers later and the cod fishery is not an inshore one.  Early in the season many of the head boats on the south shore of Long Island have found decent picks of cod, ling, and large begals.  As the season moves on and the temps drop though, it’s usually a minimum of 40 miles to the wrecks these delicious fish call home.

Bundle up and pack up that cooler!