It was a late May 2012 in Southwestern Wisconsin. It was unusually warm for May. There was an odd wind coming out of the Northwest. Typically winds from the Northwest this time of the year were cold. The temperature raised about 10 degrees warmer than the day before. The warm up intrigued me. I thought the trout may turn on because of it. I hurried home to get my gear and get out fishing.

It was 2 pm by the time I hit the stream. The wind was warm, but a little too blustery at times. My casts were not the best at the beginning of the outing and I ended up in the trees a couple times. It was hard to feel frustrated on this warm May day with the wind in my face and a rod in my hand. The ground was still quite soft from the winter melt off. I decided to take the good with the bad and continue on. The trout were eager when I did get a good cast in. 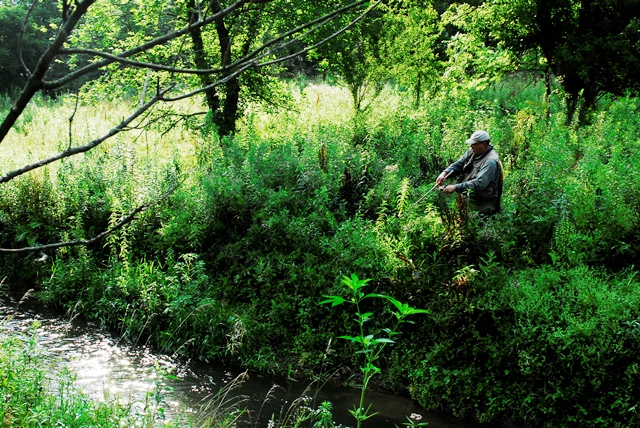 The stretch I picked was a long one. It was owned by three different land owners. I had permission on the beginning and ending stretch. The middle section was a wade only stretch. I finished the middle stretch and the last stretch opened before me. It was wide open with a fallow pasture. The cows had not manicured the grass yet. The grass was about mid-thigh high. I was happy to get out of the water and walk stream side.

There was a cow path on the edge of the stream that I used because I was a little tired from the long walk. The path had some wear, but it was not beaten down like years past. I was up higher out of the stream and could see much better ahead of me. The wind became a factor again and the chop on the water was bad. I actually was enjoying the odd wind in my face and the smells of the stream. It was refreshing because of the long winter. I had to time my casts between gusts. It seemed to work well. It was getting late in the afternoon and it was overcast. I kept telling myself, “This is my last cast. If I get a decent trout I will quit for the day.” I trudged on for that one last decent trout.

I saw movement in the grass about 20 feet ahead of me. Fishing abruptly became secondary and my gaze focused on the movement in the tall grass. I was not sure what I was looking at to begin with. I thought I had walked up on a opossum, or a raccoon because I could only see a little fur through the tall grass. Things changed very quickly.

I then saw a furry ear rise up out of the grass. My first thought was I had found a dog in the grass taking a nap. My past encounters with dogs on streams were varied. I reached down to my left side for my bear pepper spray. Before I could pull the spray out of the carrier it appeared in its entirety in front of me. I froze in my tracks and didn’t move a muscle.

The front end of the creature lifted up and then I saw its rear end and tail. It stretched like I had seen many dogs do when awoken from a nap. It was facing away from me and it was not a dog. My attempt to secure my pepper began again. My hands were shaking very badly now. There was an adult wolf standing 20 feet from me and it had not seen me yet.

The wolf looked darker than I had seen photos of and much larger. I had watched “The Gray” movie that spring and all the bad scenes of the movie flashed before me. I was petrified with fear. My strong hand had a hold of my fishing rod. For some crazy reason I had not dropped it while trying to get the pepper spray. I was flailing with my left hand in an attempt to get the pepper spray. I questioned myself for the placement of the pepper spray on my left hip. I had it there because it interfered with my casting on my right hip. I did not want to take my eyes of the wolf. Then it happened.

I saw its ears go back and the hair on its back stood up. It slightly dropped its back legs. Its stare was terrifying. It was so close I could see that it had a wet nose. I finally quit being a deer in the headlights and dropped my pole and reached with my right hand slowly to my pepper spray. The whole time I was keeping close eye on the wolf. I could not secure the pepper spray without looking at it. The description of the events makes it sound like I was staring at this wolf for 10-15 minutes when it was only 10-15 seconds – much too long in my opinion.

Pepper spray was my only defense and I needed it now! I dropped my eyes to my hip to secure my pepper spray and got it quickly. Next I had to get the safety button off. This went by in an instant because I had trained with the pepper spray. I had it up and armed and was pointing where the wolf had been. It was gone. When I broke eye contact with it, the wolf must have seen that as its opportunity to run. I did a 360 quickly to make sure it wasn’t flanking me. It was nowhere to be seen. I picked up my rod quickly and side stepped right traveling out of the field.

Each time the wind blew it made me think something was coming for me when the grass moved. The stories of my youth that involved the big bad wolf were flashing through my mind. I thought where there was one, there is more came to mind. The sideways walking to the road seemed to take forever. I did not want to turn my back to where I had last seen the wolf.

My thoughts were rambling. It came to me that the wolf was sleeping with its face to the wind to be alerted to danger. The wind and the soft earth made my approach silent and without a scent to alert. I evaluated my reactions to the wolf. I was not pleased with my locking up under stress. If I had sprayed the pepper spray at the wolf I would have indirectly sprayed myself in the face due to the wind.  I decided that a pepper flavored human may not taste well to wolves so if one attacked I was going to empty the canister.

I was finally on the road walking back to my truck. I checked behind myself quite often and my pace was almost a jog. It seemed like it took forever to get to the vehicle and get the door closed. I sat there for a short time getting my stuff together. My heart was still racing and trying to erupt from my chest. I decided on the way home I was not going to tell my daughter and wife about my close encounter.

I did not return to that stretch in 2012. I started to pester my wife about buying a pistol for self defense and for carrying on stream for my safety. She vetoed the purchase of a pistol for three months until I told her a short version of this story. I purchased a pistol online the same day and had my concealed carry permit 3 weeks later. This was early November. Trout season was closed.

During the closed season I practiced with my pistol. I had purchased a shoulder holster for my 357 magnum. I picked a revolver because of my law enforcement background. A pistol that may become wet while wading during fishing needs to be dependable. Revolvers are much less apt to jam than an automatic. My pistol is a short barreled version so not to hinder my drawing of it in a stressful situation. The shorter barrel also makes the pistol much louder than typical so the sound of the pistol would also be a deterrent. I also wore my bear pepper spray on my right hip instead of the left after the close encounter with the wolf.

I know there are some folks cringing when they read this story. Some are scared like I was and others think my fear is unsubstantiated and are critical. I don’t kill animals for sport. My gun is for personal defense and you weren’t in my shoes on a warm windy day in May with a wolf literally feet away!