The last couple of decades have seen invasive plants, animals, and pests taking its toll on Wisconsin’s and much of the Midwest’s lakes, rivers, and countryside. The Wisconsin DNR and many citizen based organizations are working hard to stop the spread of these invasives, but there are so many numerous invasives that this is a never ending project. It is impossible to stop the invasion of invasives, but they must be controlled and prevented from further growth. People are constantly moving invasives around and often when a non-native species is brought into an area it will spread rapidly and widely while taking over the area. When this happens, the spread can cause major harm to the native ecosystem and/or humans. When non-native plants, animals, or pathogens take over a new area and alter the ecosystem, they are considered invasive species.

Invasive species become a problem when they leave their predators and competition behind in their native ecosystems. Without any natural checks and balances, they are able to reproduce quickly and out-compete native species in their “new” location. This has happened with purple loosestrife, zebra mussels, garlic mustard, and now Japanese hops to just name a few of the invasives that we are currently facing in Wisconsin. Invasive species can alter the ecological relationships among native species and can affect ecosystem function, economic value of ecosystems, and human health. The Wisconsin DNR says that 42% of the species on the Federal Threatened or Endangered species list are at risk because of invasive species. Many of these invasives have come to North America from Eastern European countries ships coming to U.S. waters and the Great Lakes. These ships have to dump their ballast waters and many of these non-native species are in this water.

Most of us have heard about these invasives like zebra mussels, spiny water fleas, purple loosestrife, and rusty crayfish. But, there is now another new invasive that is spreading rapidly and threatening our environment. This plant is the Japanese hops plant that looks nice as a garden plant and would be a great addition to the home-brewer. But, it is not good for brewing or for home landscaping. It should also not be considered for forested areas or stream banks according to DNR biologist and invasive expert, Kelly Kearns.

Japanese hops are not suitable for home brewing because it lacks the oily resins that give hobs their aroma and unique flavor. The plants vine-like growth appeals to people as an ornamental plant, but the uncontrollable nature and irritating hairs make it a highly invasive plant in the Eastern United States and now Wisconsin’s forests are severely threatened by its growth and rapid expansion. DNR biologist, Kelly Kearns, says “this aggressive vine grows over vegetation and forms thick monocultures of dangled vines up to several feet deep. They twist up and topple trees, crowd-out desirable species, and inhibit forest regeneration.”

The first reported incidence of Japanese hops in Wisconsin was in Crawford County, but according to the DNR it is spreading rapidly throughout the southwestern or Driftless Area of the state. There also have been reports of heavy infestations in Grant, Crawford, Vernon, and Lafayette counties. There also are reports of an expansion of the plant into neighboring counties like Sauk and Dane counties.

There are reports of Japanese hops plants growing up to 35 feet in one year! The hops plant reproduces by seeds which mature and spread in the fall which provide seeds for germination the following spring. The seeds can remain viable in the soil for up to three years. Japanese hop plants love river soil and sunlight making river passage-ways an ideal location for their growth and expansion. When the plants go to seed, the seeds can be carried down-river to new areas for growth. The plant is considered an annual which grows rapidly in the warmth of summer and is then are killed off in the winter. Their seeds then will start new plants in the spring the following year. But, there are now several sites in Grant County where the plant is over-wintering and it can travel anywhere that people, animals, and water travel.

Japanese hops is prohibited throughout the state and concerned efforts are being made in counties where the plant is common and expanding like; Crawford, Grant, and Vernon counties. Natural resource managers, land owners, and citizens are fighting to keep this invasive plant out of our forests and waters. Hand-pulling works in small patches of the plant and for larger infestations mowing and cutting regularly cuts down on seed production. Plants grow rapidly, so frequent cutting is needed to control expansion. Spraying leaves with a systemic herbicide like glyphosate, are also effective in the spring. There is still hope in controlling Japanese hops because it reproduces by seed and controlling the seed bank will reduce their populations. Let’s hope that this invasive can be stopped or at least controlled in Wisconsin. 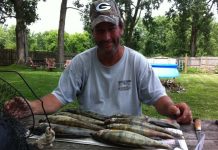 What’s Happening to “The People’s Fish”?