It’s that time of the year (late summer) when fish are getting hard to find and even tougher to catch. During August and into late September, daytime temperatures are regularly in the 80’s and sometimes even higher making comfort on the water a difficult to find. The warm water of late summer has increased weed growth, encouraged algae blooms, and even prompted fish kills on some lakes. The fish kills are mainly due mainly to oxygen depletion from the hot weather and the stress that it causes on some fish species. These “dog days” of summer don’t help fishing, since most fish have moved to deeper water in areas of mid-lake structure earlier in the summer. Now, fish have a tendency to move around more, chasing schools of suspended baitfish out in most lakes main basin’s deeper water. The fish that were in shallow water early in the season, have moved to their summer haunts and only make forays into shallow water to feed. Most of the movement into the shallows occurs during low light periods (before sunrise and after sunset) and at night. 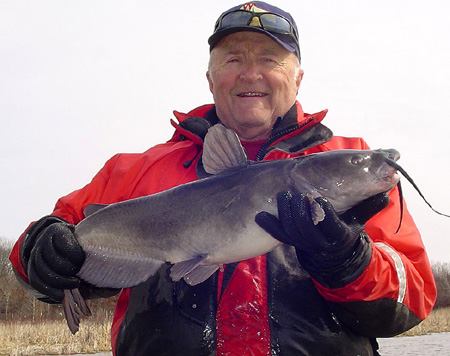 We’re lucky enough in Wisconsin to have numerous lakes and rivers that have an abundance of catfish. Maybe, the reason that catfish (channels, flatheads) are so plentiful is that most anglers are fishing for walleyes, bass, muskies, and panfish. Catfish don’t get the respect that other fish species receive and many anglers have never experienced their great fighting ability and good taste. A few anglers do well during the hot months by adapting to the ever changing summer patterns of fish, but many anglers have their fishing productivity decline as the summer progresses and the weather warms. But, catfish fishing gets better as things heat up! Summertime catfishing is a way to improve and prolong your summer fishing while getting some excellent table fare. Most Wisconsin rivers like the Mississippi, Wisconsin, Fox, Wolf, Crawfish, Rock, Pecatonica, Kickapoo, Baraboo, and Yahara Rivers all have good catfish numbers and provide constant warm-weather action. Many of the states inland lakes also have good catfish numbers, especially if they have a river running into the lake and thru it. All of the lakes in the Madison Chain and the Winnebago system are great waters for summer catfish. If you travel up and down Wisconsin’s rivers, you’ll find that people who live in close proximity to rivers are usually catfish anglers. These “river rats” have learned to appreciate catfish for their fighting ability, ease in catching, and again their great taste. Many of the catfish that I catch on the Wisconsin River are caught accidentally when fishing for other species. These cats are usually caught on live bait when anchored below a river snag-hole, when live bait-rigging, or trolling and drifting with crawlers and spinners. If going catfishing, I’d suggest that you go out toward sunset and plan to stay out till well after dark. Catfish move up on the feeding shelves, rock bars, and into shallow water (5 feet or less) after dark and throughout the night-time hours. 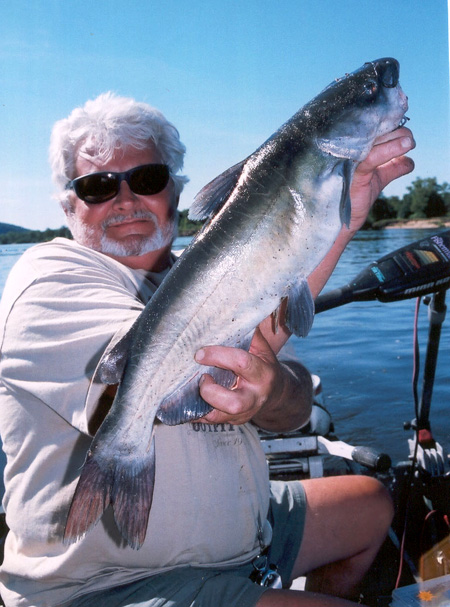 There are numerous local concoctions of catfish stink bait that are used by “river rats” to catch catfish. Most river towns have their own local “recipes” of stink bait for Mr. Whiskers. These mixtures often contain cheese, chicken livers, blood, fish, and shrimp that are “cured” for a few days to gain their distinct odor and consistency. A couple of the better, commercial stink baits are; Sonny’s and Uncle Charlie’s Catfish Bait. The problem is that as the water warms its harder to get the stink baits to stay on your hook. Different devices like sponges and tubes are used to hold the bait on the hook longer and keep you from constantly re-baiting your hook.

I’ve talked to numerous “old-timers” who swear the best bait for catfish are small bluegills, sunfish, chubs, and even night crawlers. Before going catfishing, these locals say you must go out and catch your bait for the night. They use a light wire hook, 4 # pound test mono, and a piece of worm to catch their bait. Cut bait from ciscos, suckers, mooneyes, and chubs also work well for both channel and flathead catfish. The cut bait should be cut into V-shaped pieces about an inch and a half long and hooked onto a No. 2/0 red catfish hook. The rest of the equipment one needs includes a good stout 7 foot rod with a quality bait casting reel (Garcia Ambassador 6500) spooled with 15 to 25 # Stren Original monofilament. On the end of the mono, put on a slip sinker (1/2 to 1 ounce), tie on a barrel swivel, and then a two foot lead of flurocarbon to the hook. This rig should work for most catfish that you’ll run into in local rivers.

There are many locations to fish for catfish in Wisconsin and many are close to home. Anchoring near wood, deep holes, river bends, and mouths of bays off the main channel of a river are all good spots to start your catfishing adventure. I suggest fishing at night because cats are much more active after dark and they’re also in shallower water making them easier to catch. I suggest fishing an area for 30 minutes before moving on to a new location. If there are catfish around, you’ll soon know. Bring along some good lighting, plenty of bait, and a chest cooler of ice to put your catch in if you don’t have a live well or are fishing from shore. Shore fishing for catfish is easy to do, productive, and gives many anglers without a boat the opportunity to catch some tasty fish on most rivers in the Wisconsin and the Midwest. 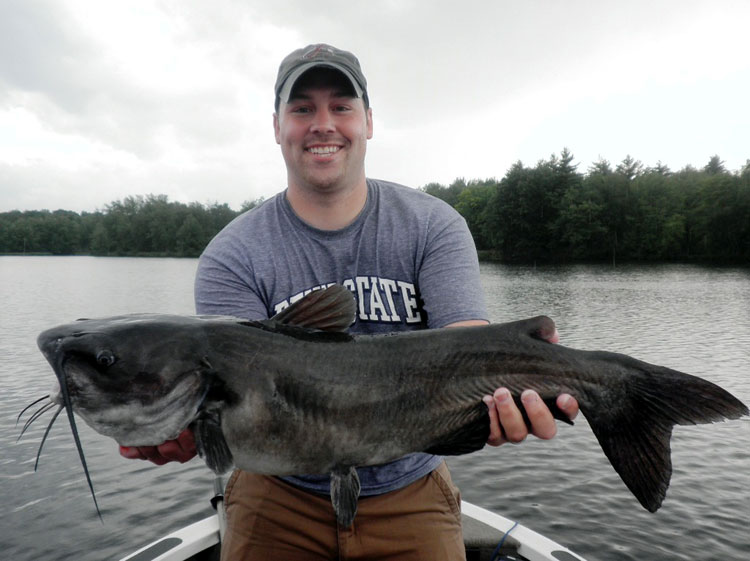 The Wisconsin River is full of catfish of all sizes. The area directly below the Prairie du Sac Dam is a good location to start fishing. The scour hole (over 40 feet deep) directly below the dam always has catfish in the summer because the waters have an abundant oxygen supply which can be hard to find during the warm summer months. The few miles from the dam to the Highway 12 Bridge contain many great catfish locations and is worth fishing anytime you can. Another good spot to fish is the north side of Madison’s Lake Mendota, where the Yahara River enters the lake. There’s 20 to 25 feet of water here and cats like this area year-round.

The smaller cats or “fiddlers” (channel catfish) are great eating, if you cut out the mud-vein on the fillet. Soaking the bigger fish in milk overnight also is another good way to prepare catfish for the table and can take away any fishy taste. Let the big fish go and keep the eaters from 15 to 20”. This is a great way to spend a summer evening and another way to catch fish during summer’s hotter months when fishing can be difficult.

How and When to Use Cut Bait